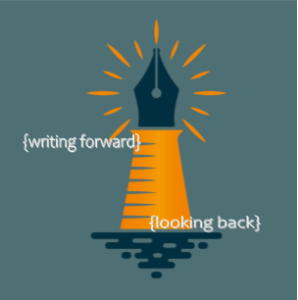 It’s been three years since my mother was last meant to have retired.

Originally, it did not stick.

It’s partially a teaching thing. There’s always some class somewhere who needs you, and whose teachers are students you once mentored or something, and they ask – please? – if you couldn’t fill in for them while this or that happens, while someone has maternity leave, while the earth implodes and reforms its mantle and the dinosaurs return. It’s always something. And, my mother, usually, is happy to help. Usually. Lately, though, she’s been counting the days ’til her last subbing job is over, and saying, “Okay, I’m done.”

I think she means it, too.

I wrote a poem in response to one my mother wrote to me, about the time she went back to work, and with all the bird flurries going on just now, it fits the bill for a poem to which I want to respond. 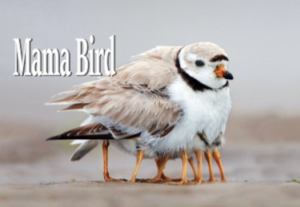 No nightingale, nor angel without wings
Her song rings out while pushing playground swings –
“Use listening ears – Is that what Teacher said?
“Sand’s not for throwing. Throw a ball instead.”
Long years her songs have echoed in the yard
As Littles changed, and outgrew her safeguards
Such weary notes must falter now, sometimes…
“Keep bottoms on your chairs. It’s clean-up time!”
Some birds fly south, once eggs, now hatched, take flight
Are RV migrants, dawn, until twilight
This nightingale, whose silver-plumage shines
Still loves the song, affection genuine.

I love the resigned expression (if birds can have an expression) on the face of this piping plover, as all of her chicks cram themselves in around her legs. She’s probably wondering if she’ll ever walk alone again – I know my mother did. (The real question was probably more along the lines of if she’d ever get to go to the toilet again in peace, but let’s just draw a veil over that, shall we?)

In nature, parents are allegedly much more stern parents, and push their babies out of the nest. That’s not exactly true – more often than not, baby birds are nagged out of the nest, teased, cajoled and bullied – just like human babies. Most often, though, the babies just… try out their wings one day, and fly. Sometimes, it is simply… time. One of the more terrifyingly adorable babies of the natural world are wood ducks. Wood ducklings, according to PBS, jump from nests upwards of fifty feet high. And, they… bounce.

There’s a life lesson in there somewhere… no, it’s not the one about leaping and the net appearing or whatever nonsense. The more likely lesson is that if you jump, you may land more safely than you’d imagined. Perhaps, the lesson is a Leap Year koan, something about, get out of the nest already, and give your wings a try. Whatever it is, I imagine it’s all in learning how to fall. Here’s to trusting the blue…

For your edification, this is a variation on a kyrielle. 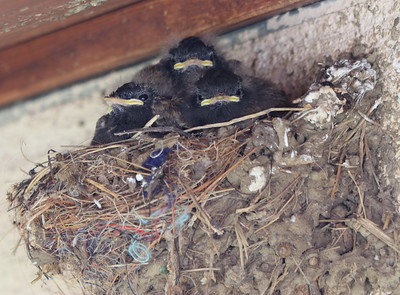 They, loudly chirping, clamor for a bite,
A place to hide, or entertainment – rights
Which they demand as lawfully their due,
Beaks gaping wide and feathers all askew.

But soon enough, their din and racket swells
(Almost as soon as their beaks breech their shells…)
Their growing wings and bodies can’t subdue
The restless urge to bid the nest adieu.

They stretch their wings, gravity’s neophytes
‘Til one small step entrusts them to the blue.

Spring is coiling to spring forth, the birds are busy, and there are poetic revelations – and a whole lot else – happening all over. Our poets are revisiting their writing – Laura‘s revisit is here, and Sara’s is here. and Liz is here. Tricia is here. Other of our poetry seven may pop in later in the weekend.

In the mood for more? Poetry Friday is hosted by Karen Edmisten, she of the shockingly clever blog with the perfectly lovely name. Have a marvelous nearly-Spring weekend, and don’t forget to leap.