I mentioned my conflicted feelings some months back about my mother coming out of retirement to return to teaching, and many of you kindly reassured me that your parents – or yourselves – worked well into your seventies and didn’t die of it. (The Atlantic actually recently did a piece on this very phenomenon.) This culture has granted us artificial ideas about when we’re “grown” enough to set out on our own, and when we’re meant to lay aside our independence, and I think I fell willingly into that pretend-we’re-all-the-Jones’-rich idea that wants so desperately to ignore differences in class and income. My parents aren’t rich. I’m not rich. It is what it is.

In November, my family came, with friends in tow, to our new house for Thanksgiving… and it was a literal crush, as our new house is MUCH smaller than our old one. And I’d just been diagnosed with the autoimmune disorder I’m living with, and was trying – hard – to be the hostess-with-the-mostest; some blend of B. Smith and Martha Stewart with sprinklings of Emily Post. My mother wrote a poem about me on the fly, as I took everyone on a postprandial walk around the neighborhood.

My mother isn’t a poet… that she reached out to me in my own language, as it were, floored me, as it is a truly loving act. Also really cute. And so, I’ve finally written her one back. 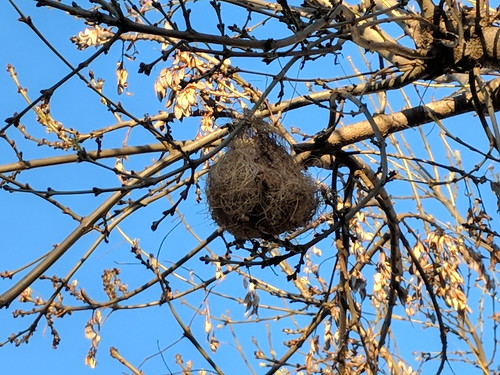 No nightingale, nor angel without wings
Her song rings out while pushing playground swings –
“Use listening ears – Is that what Teacher said?
“Sand’s not for throwing. Use a ball instead.”
Long years her songs have echoed in the yard
As Littles changed, and outgrew her safeguards
Such weary notes must falter now, sometimes…
“Keep bottoms on your chairs. It’s clean-up time!”
Some birds fly south, once eggs, now hatched, take flight
Are RV migrants, dawn, until twilight
This nightingale, whose silver-plumage shines
Still loves the song, affection genuine.

Poetry Friday today is graciously hosted by Elizabeth Steinglass. Happy weekend, and remember to be good to your Mama birds, if you can.