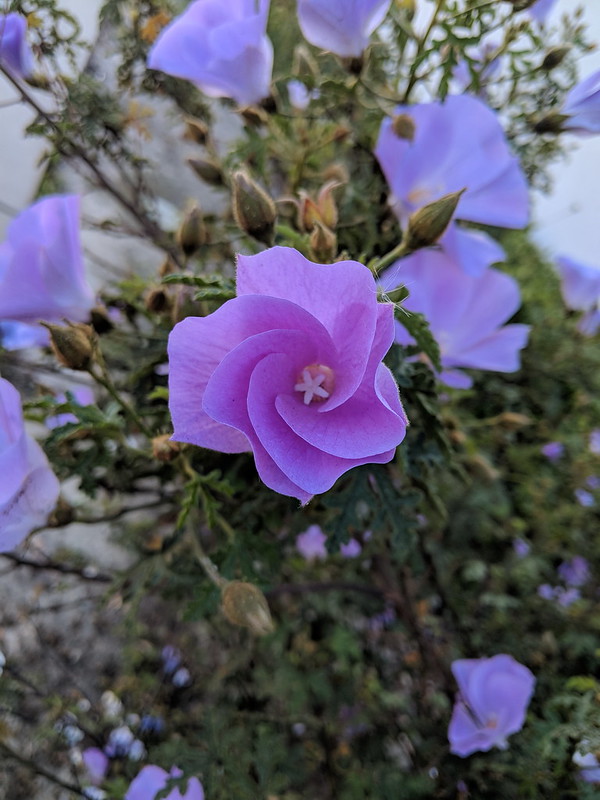 No idea what kind of flower this is, but it was unfurling outside the post office where I – finally, after entirely removing three chapters I’d moved around in the narrative twice before – mailed off my latest project.

I shall take a tiny moment and say “Hurray!”

There is a lot swirling through my head this morning: yesterday, I attended a community concert on behalf of our chamber choir, and upon returning home a.) found out that the mother of a dear Scottish friend of mine has died, a woman I had met and enjoyed; b.) was told a “you’re-not-supposed-to-know” update on my Dad’s cancer, c.) then, my autoimmune disorder, which over the last two weeks lulled me into a false sense of serenity, bloomed out in full malevolent force, and d.) myriad people asked me if I knew what was going with Anne Ursu’s report, and the subsequent discussion in School Library Journal on sexual harassment in the children’s lit industry. (After a bit, the comments are NOT worth reading. Reader discretion is advised.)

I decided to take a bath and go to bed.

Today is a new day, and everything I tried to ignore yesterday has returned to pay a call. In triplicate.

There is so much good – all of the Youth Media Awards from the ALA are in and faaaabulous, and Erin Estrada Kelly’s win is well overdue, so I’m thrilled she’s being honored; the fourth Asian overall, and the first Filipina to BE honored with a Newberry by the American Library Association – within the horrible, there are shades of wonderful swirling past (Witness Rick Riordan’s commentary and Gwenda’s sterling response and empowerment to the community.). Still, I feel like I’ve been caught in a hurricane, one the forecaster had predicted, but which had been ignored.

So, here’s a song to which you can sit and breathe… and then, get up, and head back into the fray.

One Reply to “{so very Monday}”