I told you! I told Jackie she was going to win. And I said that if she won, I would tell all of you something I learned this summer, which is that Jackie Woodson is allergic to watermelon. Just let that sink in your mind.

Yeah, remember that? 2014, the National Book Award, televised on C-SPAN and elsewhere. People are so heartened to see African Americans on the National Book Award finalist list. Poets and writers and people of letters are tuning in. In the children’s lit community, we’re thrilled that Jacqueline Woodson, one of our steady bright lights in YA literature, has won. She’s earned that BIG award, one which will thrust her outside the quieter waters of children’s lit, and… in that moment, the professional crowning pinnacle of her success thus far, the presenter makes …a watermelon joke.

“In a few short words, the audience and I were asked to take a step back from everything I’ve ever written, a step back from the power and meaning of the National Book Award, lest we forget, lest I forget, where I came from.” – Jacqueline Woodson, quoted in the New York Times. 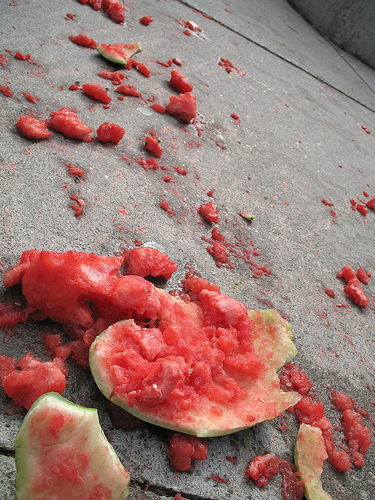 He had an hundred million reasons why, later, he had remarked so disparagingly on the poets who were nominated, why he had told jokes and tried to wrest the attention of the crowd from the nominees onto his vast and hungry ego. But, it wasn’t personal; he cried no foul, she’s my friend! a thousand times, and yet, that moment, those sly, knowing words sliced thousands of us to ribbons, as the audience laughed, and a tall, serene woman had to stand – and yet again, endure. Endure. Endure, with her face at peace, as if the buffoonery of the man before her didn’t reach her.

I don’t support hate, and yet, in that moment, that dizzyingly visceral emotion shivered in my sight. Gut-punched, I wanted to both hiss and claw, scream and spit. As far as I was concerned, that man was finished, and I was done with him and all his works, forever. I never bought, reviewed, read, or talked of anything else he said or did. It made no difference to his life, I am sure, but it seemed right, to me, to simply use my internal Wite-Out and blot him from my notice for the rest of forever. I was fully over this “problematic” favorite.

It’s clear that I’m still sitting with our current moment in the children’s lit industry, trying to work through it, and thinking about the last time that so many voices came together to exclaim in disgust. It was for our Ms. Woodson, and rightly so. The commentary was sharp, and loud – and ultimately… was placated by the huge monetary donation Handler gave to We Need Diverse Books. And then, most of the voices were hushed, pressing their hands against the shoulders of those who still rose up, and their hands over the mouths of those still bitterly protesting. He apologized. He made it right. You can’t judge people on what they say.

But, yesterday, after Handler wandered flat-footedly into the pages of children’s lit history again, this time into the earnest signatories of the #ustoo pledge, wherein members of the children’s lit industry pledged to hold accountable conferences and gatherings, and not attend those which have no clear sexual harassment policy, people took him to task for his very clear participation IN the harassment. The very innuendo-laden jokes, in front of children and adults. The demeaning sexual talk. But — he apologized. He made it right. You can’t judge people on what they say.

It seems clear that you can, unless what you say is racist.

In my small and petty way, I blocked Daniel Handler from my sight years ago – but he’s still been doing things, writing, being invited places, feted within the industry, and I’m the doofus who didn’t realize that his “little faux pas” on Ms. Woodson’s big night had long been forgotten.

But, as Heidi so succinctly asked, didn’t we figure out this guy was trash after the watermelon thing? What are we doing still courting that kind of person to be a speaker and to visit classrooms? Why don’t we seem to take the humiliation, shame, and harm of racism as seriously as we’re all endeavoring to take the #metoo harassment thing?

In all seriousness – is a #metoo movement going to actually succeed if, once again, racism is instructed to take a seat at the back of the bus?

1897. “The day before the inauguration of the nation’s 28th president the Congressional Committee of NAWSA hosted a large parade on Pennsylvania Avenue in Washington, D.C. The idea behind this was to maximize onlookers who happened to be in town to attend the inauguration. Woodrow Wilson expected a crowd at the train station to greet him; however, very few people actually showed up to greet the president, the largest part of the crowd was his staff. The parade was led by the beautiful lawyer Inez Milholland Bouissevain upon a white horse. This image of her as a warrior atop a horse is what made her an iconic image in the fight for womens’ right to vote. This massive parade consisted of no less than nine bands. It also included four brigades on horseback and close to eight thousand marchers. The parade was cut into sections: working women, state delegates, male suffragists, and finally African-American women.

The point of the parade was “to march in the spirit of protest against the present political organization of society, from which women are excluded.”

Ida B. Wells-Barnett, the journalist who led an anti-lynching campaign in the late nineteenth century, organized the Alpha Suffrage Club among Black women in Chicago and brought members with her to participate in the 1913 suffrage parade in Washington, D.C. The organizers of the march asked that they walk at the end of the parade. She tried to get the White Illinois delegation to support her opposition of this segregation, but found few supporters. They either would march at the end or not at all. Ida refused to march, but as the parade progressed, Ida emerged from the crowd and joined the White Illinois delegation, marching between two White supporters. She refused to comply with the segregation.”

– Excerpts taken from One of Divided Sisters: Bridging the Gap Between Black and White Women by Midge Wilson & Kathy Russell, Anchor, 1996, and PBS.org.

I think I’ve been naive, and pretty quiet – but it’s clear the time for my naive assumptions is way over. 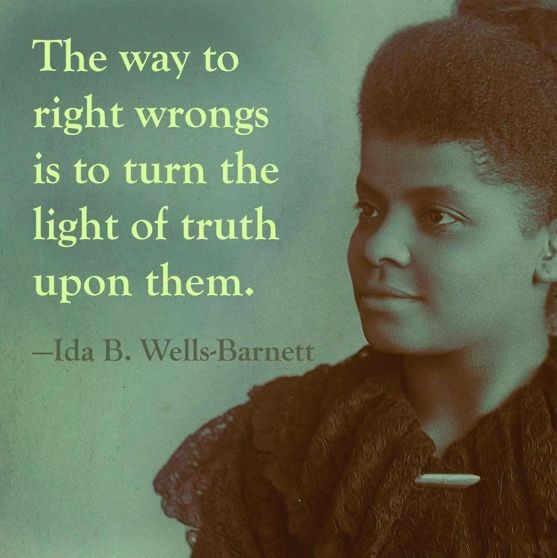