How on earth is it already August!? This year has seemed to be the longest parade of awful, ever but somehow this summer is flying by like greased lightning. I guess it’s just that the pace of the chaos has sped up…? Who can tell. This week, I’m writing poetry from a new garret, in a house still filled with the odd unpacked box or stack of somethings. 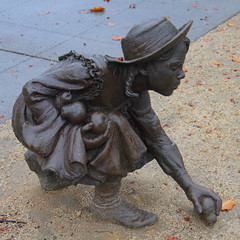 Our August Poetry Project is another Salas Special, wherein Laura gave us the title and let us go hog wild. Well, that’s never a good idea for me. I was stumped for ideas for a hot minute until I narrowed down my Flickr selections of statues to the actual park, and not entryways, old buildings, cemeteries… These bronze statues are in a graveled park, a short cut between a strip mall and a street of shops. The pair of them are gathering pears. The girl is gathering windfalls, while the man takes care of the official harvest. The light and the wet day perfectly captured the ineffable quality of an autumn afternoon:

Statues in the Park, Vacaville

I like that, but still find five-line poems a struggle (if I actually follow the rules for syllables, which I patently did NOT in the final line). Five lines are just not enough time for wordy-old-me to invest a poem with emotion – which is why I deeply respect people who can really make tanka really work. (I keep trying, though.)

I gave up on the quintet form and just went with rhymed couplets — and a statue that stopped traffic for me. Ever been to Treasure Island? 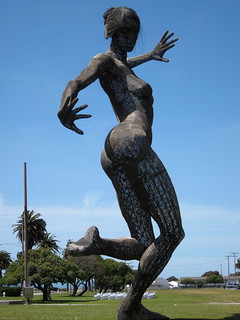 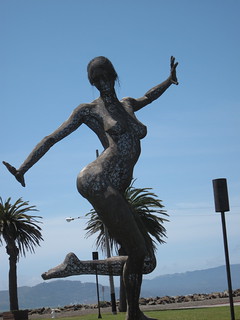 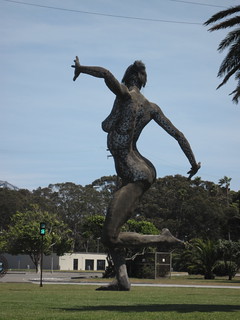 Statues in the Park: Bliss

Like no one’s watching, dance, they said
Away your fears, take joy instead!
Such glib advice! So hard to take.
(Perfectionists can’t risk mistakes.)

Who wouldn’t choose a bird to be –
All blithe-winged swooping, flying free –
…But, what goes UP must come to grief.
DOWN follows up. Joy’s flight is brief.

Is fearing, living? NO, say I
If convention we satisfy
And let “tradition” turn our feet!
Take back your drum! Dance to your beat.

This is “Bliss Dance,” by Marco Cochrane, on the great lawn at Treasure Island. She is forty feet tall, and she literally, the first time we saw her, caused us to hit the brakes and gawk. She. Is. Huge.

Some art you can encounter once and simply remember it. Bliss, I could visit repeatedly. She’s just…there larger than life, and …brings to mind the William Carlos Williams poem, “The Kermess,” another poem I memorized in college. I love the joyous defiance of Breughel’s-great-picture-The Kermess; the poem’s thick shanks and big butts and bellies all swinging round made me so happy. Bliss’ body is traditionally symmetrical, but her nudity puts her on the same level – she’s unashamed and getting her slightly awkward, spinning groove on. She’s probably going to trip over her own feet, in a minute. Do you think she cares? 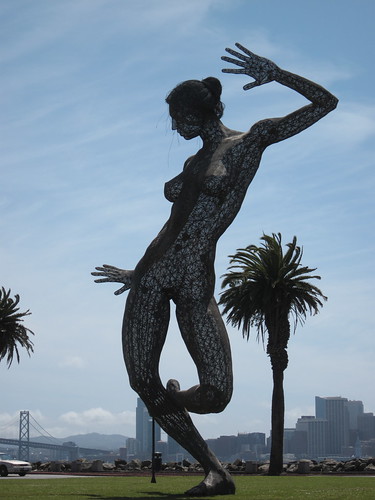 The poetry sisters are in the house! Some of Laura’s statues are just waiting for you to leave. Sara’s diving into the complicated uses of Lincoln’s memorial. Tricia’s managing to write surrounded by family. Kelly’s playing with the idea of release, while Liz is traveling. And don’t forget to wave hello to Andi, who is cheering us on from the bench this week.

There’s more Poetry Friday this lovely early August day! Our hostess kicking off the month in style is Donna@Mainely Write. Put on your dancing shoes, dearhearts, and shimmy through your weekend. They’re all watching. Who cares?