The Golden Shovel’s title enlarges the idea of tribute, of “shoveling” the golden bits of another poem for reuse. First, a poet takes an admired line, then, keeping the words in order, uses the words from this line as line endings in a new poem of their own creation. Finally, the poem reveals their new creation, and credits the old.

We chose the hardest poem to work with, Gerard Manley Hopkins’ “Pied Beauty.” You remember the tongue-twister that you utterly failed to memorize in the seventh grade for speech class?

Glory be to God for dappled things –
For skies of couple-colour as a brinded cow;
For rose-moles all in stipple upon trout that swim;
Fresh-firecoal chestnut-falls; finches’ wings;
Landscape plotted and pieced – fold, fallow, and plough;
And áll trádes, their gear and tackle and trim.

All things counter, original, spare, strange;
Whatever is fickle, freckled (who knows how?)
With swift, slow; sweet, sour; adazzle, dim;
He fathers-forth whose beauty is past change:
Praise him.

Once I got over the shrieking horror of How am I supposed to work with compounds like ‘chestnut-falls’??? Is that one word, or two???, I began to figure out what this poem was – and what it was not. Foremost, it was not a rewrite of Hopkins’ original. In Terrence Hayes’ original poem, “Golden Shovel,” based on Gwendolyn Brooks’ “We Real Cool,” (1959) he took her words and whipped them into a whole new dish. The poignancy and bravado of a nameless black boy cresting the hill of adulthood is certainly there, but he’s not leaning heavily on the bravado of school-skipping adolescents hanging out at a pool hall. Once I stopped trying to rewrite “Pied Beauty,” my process cleaned up a whole lot… though I was still tempted by it. As you can see, I took for use the first line of Hopkins’ exultant poem: 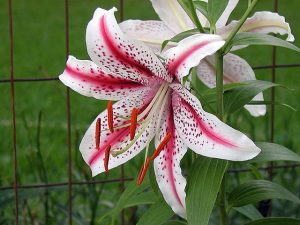 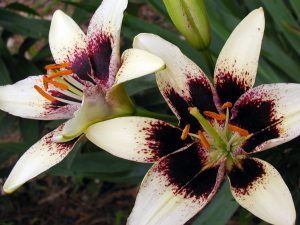 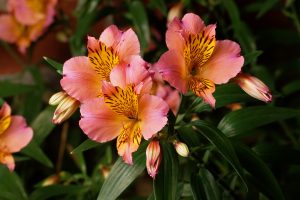 there blooms the lady, gaudy in her glory —
as a trumpet blast. Bright freckles massed might be
music, presaging summer’s solo. Oh, to
grace a garden, now that spring is here. Does God
dream in stargazers? Let no beauty be for–
gotten: strumpet striped, dewy, sunlight dappled;
dizzy, drenched, these senses! delight in all things.

Moving past my usual squeamishness about blank verse, with its resultant no-rules/no-brakes feeling, I wondered, next, if it was possible to add a little lightness to these poems. Oddly for a tribute form, most I’ve seen are quite serious in content. While the rules in a Golden Shovel freed me from the tyranny of end-line rhyme, I found that thematically, with this poem specifically, thematic variance was nearly impossible. (I’ll be interested in seeing how my other Sisters managed this — I could not.) I’m just not sure how else I could have used these particular lines, although the second half of the poem might have .

“we’re made of star-stuff.” this, a dazzling sendup of us all;
humanity made luminosity. great, glowy things —
reactive (con)fusions, ticking like a Geiger counter,
our radiance cosmic, scintillating & original…
yes, we’re stars… but, mostly quarks: odd parts in a box marked ‘spare;’
we broke the mold. we’re distinct, authentic, genuine… strange.

My one regret is running out of time to try for the last two lines (despite what Laura was told, the last two words constitute no challenge at all, thank you) – but maybe someday!

With such a busy month, we had zero time for collaboration, so like me, I know you’re dying to see what Sara (who is in NM with her kids just now, so may post later next week), Tricia, Laura, Kelly, & Liz are shoveling up this week between commencement, travel, and other ceremonies. Andi’s not with us this month, but we know she is reading and being filled. She will be back. More Poetry Friday goodness to dig your teeth into is found at Buffy’s Blog.