This month, Andi had the most amazing images for us to share of a site in her home state, the Glencairn Cloister, family home of Mildred and Raymond Pitcairn. If you want to take a digital stroll there, you can look at the front of the church that the cloister adjoins. As to what a cloister is:

During medieval times cloisters served as a quiet place for religious contemplation, and cloister arcades were often carved with symbolic sculptures to encourage mindful meditation. In planning Glencairn’s cloister, Pitcairn, a member of the Bryn Athyn New Church congregation (Swedenborgian Christian), continued this tradition. The visual focal point of the space is a series of symbolic bird capitals surmounting the columns that form the inner arcade. According to E. Bruce Glenn, author of Glencairn: The Story of a Home, in New Church tradition birds are used as spiritual symbols of “those ideals of the mind that lift us above worldly concerns as the flight of a bird draws our eyes from the earth.”

There are birds and arches and courtyards and benches carved with animals, and they’re full of meaning. It’s lovely, and I really want to go there in person someday.

There’s a tiny bench carved with a sheep and a lamb – representing family – that especially spoke to me. In this Sturm und Drang world in which we live right now, a tiny bench, where we’re forced to sit close and look at each other seems… ideal. When I was teaching, I was fond of the “Nose-to-nose, knee-to-knee” approach. With fifth graders, who seem to boil up into quick conflict that fades nearly as quickly, it was a surefire way to force my grudging grumps into proximity with each other. If you’re sitting facing someone, it’s harder to lie to them – and to yourself – about what happened to your friendship. It’s also harder to avoid each other. It’s harder to interrupt someone who is right there (well, usually). It’s easier to listen (mostly). One on one, knee-to-knee, the problems we face could take the first steps toward healing, if we could just listen. Reason. Together. 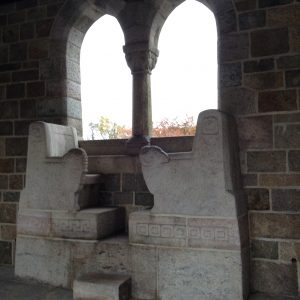 your head (my heart)
comprised of stone:
you (willful) push
and I (alone) retreat
and leave you to your phase –
our glacial war goes on for days.

my spirit (weak)
(my flesh) unnerved
I, at the table, bargain served,
but you (the victor) call the tune…
I cede the floor.
you dance (your doom).

don’t build your house (your heart)
of stone. foundations firm are fine,
but iron forged from chill confines
(of earth) do not then grow,
Or change. rebirth erupts from soil,
from honest sod (disruptive dirt!)

the breath of God breathes in
(and seeds. and life. and health)
the wind blows through and tides
that ebb become renewed.
contrive some wriggle-room to find
within the walls. (within the mind)

your head (my heart)
a maze of cracks
gray loneliness is our new black
life’s tepid soup no tears can season…
come, knee-to-knee, sit.
Let us reason.

More poetry abounds; the Seven Sisters celebrate another twelve months of poet-ing with forms of all kinds: Kelly, sharing a poulet-appointed, puffed-up perfection; Sara, who also found the same bench appealing; Liz, whose poem has itself a beautifully cathedral-like tone; Tricia, venturing aloft — and into love poems; Laura, hallowing the artistry of stone. Thanks, Andi, for the inspiration!

This concludes 2016’s Seven Sisters Poetry… next year should be interesting!

More poetry, hosted by Words for Wee Ones, in praise of community.