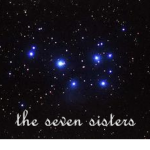 Did you have to memorize part of the Periodic Table in chemistry? Of course you did. Thank you, Dr. Plubell, for reminding us that Ha! He Lied Because Boys Can Not Own Females, Never … the mnemonics were varied, and confused, and how we sweated that test. Some schools were allowed to memorize only the first twenty elements. Oh, not our school. Dr. P. just blanked out random squares… and we were supposed to fill out as much as we could of the whole table.

Good times, no? I skated out of chemistry with a C-, I think. By the skin of my teeth.

But, I always LIKED chemistry, just as I like the idea of space and NASA and astronomy (another course I took in college, in which I didn’t really – hah – shine) and political theory and string theory and religion. I just don’t really get all of it. So, when the Seven Sisters suggested we do our crown on the Periodic Table I … quietly … died. I mean, come on. Srsly!? Not only are they real poets, one of them has a daughter at NASA, another writes science poetry while still another teaches TEACHERS math and science. I was, as usual, in way over my head.

But, the thing is, I can do sonnets. There are Rules. There are iambs. There is structure. I might not be able to figure out what Hafnium does, but by golly, I can count to fourteen.

The next hurdle was the Period. Seven poets, seven rows – it worked out. But, because in a crown that last line is the first line of the next person’s sonnet, it was a bit… fraught. Fortunately, Laura jumped right in, imagining the Table as Pandora’s box. From there, Tricia threw down kryptonite – you didn’t know that was an element, did you? – and Sara – after calling us unstable elements (a-hem) named us science lovers. Kelly managed to use the word “radioactivity” and muse at calcium’s metallic nature, and Liz had us gnashing our fillings yet not blaming the elements for our issues.

I ended up with Period 6 – full of toxic gases, poisonous metals, and a few treasures. The preponderance of deadly things in this Period really got me thinking about our historical dabbling with things that could kill us. Anyone who has watched a loved one go through cancer knows that we still walk pretty closely with elements which could wipe us out – but chemistry, and the alchemy of human intellect and courage, gives us at least a fighting chance against disease. Go, science!

Don’t blame the elements for our demise.
What doesn’t kill us – staid in chemist’s hands,
Transformed through science into health’s allies –
Will strengthen, if the cure we can withstand.

We scientists approaching this sixth row
Both toxic radon and earth magnets find.
Radiant metals, some with half-life glow
Can manufacture health for humankind.

The intellect, that bright quicksilver streak
Of those who sought the elements to tame
Theory to fact, persistence scales the peak
Of ignorance, lends wings to wisdom’s flame

So heirs of strength, persist in courage bold
Our mettle tested, move from lead to gold.

Tricia, standing in for Andi, polished our crown in a beautifully scientific way. Keeping in mind that the first line of the first sonnet is repeated as the final line of the final sonnet, that her sonnet both made elemental sense and was poetically coherent is a real feat. You can read the entire crown at Tricia’s second post.

Just as we completed our poems and pondered posting them, the Royal Chemistry Society confirmed the news that there were new elements discovered!!! Fine, but that’s for the rest of you to write sonnets about…! This has been so much (vexatious, exasperating, cranky-making, thesaurus-using) fun. And next month, the poetry continues with …Picasso? Stay tuned!

More Poetry Friday to be found at Tabatha’s blog The Opposite of Indifference. The curious and attentive should pop over and read more lovely poetry this blustery day! Happy Weekend!

14 Replies to “{pf: poetry 7 ♢ crowning our year with the elements}”