The antonyms of indifference, Merriam-Webster reminds us, are attentiveness, curiosity, warmheartedness and sensitivity. I agree, and Tabatha Yeats, a writer who blogs at The Opposite of Indifference has those qualities in spades. Dismayed at our after-Christmas distress, she sent along the perfect joyful little distractions… games! 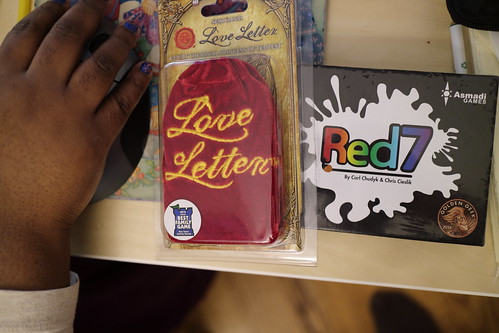 Love Letters is kind of a narrative game of risk that seeks, in a most unloverlike fashion, to knock all the other lovers out of the game. It’s kind of amusing when really cut-throat people play it; Tech Boy and I are still kind of fumbling their way through and the first round, anyway, were somewhat gentle with each other. (That didn’t last.) But Red7 is …catnip for the competitive, a game in which one has to change the rules to win. On the surface, it’s very simple… you’re simply organizing suits, in a way. But, you’re also playing seven games at a time. We were a little amused and a little relieved to see that there are Youtube tutorials – at least three – on how to play.

If the first ten days of January predict how the year will go, I’m going to be well amused (and also well drookit, as the Scots say. This rain is kind of amazing)! Thank-you, Tabatha, very much.