I was in college the first time I got a cookbook.

To be fair, it was from my Mom, and that was fine, because it’s in The Rules for a mother to launch you off into the sea of life, equipped in your frail bark with All That You Will Need (that she can give you). Soo, I had that one cookbook, Healthy Homestyle Cooking, whose title suggests Mom knew a thing or two about my habits, and was trying to throw me a life jacket before it all went wrong. (Good intentions, Mom. Too bad I didn’t really pay any attention…). And then, I got college girlfriends, one of whom gave me …dishes. And then, others gave me cookbooks, because, after all, we were looking ahead in our lives, were we not? And we were going to Set Up House (kind of like Play House, only not different) and Make Homes, and we would need cookbooks, because doesn’t everyone need a cookbook?

Not actually. See, the thing is, my mother didn’t really use cookbooks. And, when she did use them, it was only the first time she made something. After that, she briefly referred to the cookbook only for ideas. She only had one for reference, when I was growing up. It was titled, THE OATS, PEAS, BEANS & BARLEY cookbook, and it was serious, big-time hippie food. Oat, peas, beans and barley, that’s about all there was in it. The cookbook was vegan and crunchy granola (there is a great granola recipe in there), and all Mom ever used, for years and years, except for the classroom collection cookbooks we got from the Room Mothers in grade school. (I never actually saw her use one of those.) When we were older, cookbooks became part of the “things to give Mom” list for Mother’s Day, and so my mother has a few more, and her old cookbook is beyond tattered and stained and falling apart.

I, on the other hand, had tons of cookbooks.

(I’m pretty sure there’s some connection there, but I’m assured that causation is not necessarily proved by correlation, so I’ll leave it alone.)

I’m not a dedicated foodie – in truth, I’m actually kind of a lazy cook, and Tech Boy is the one who is always experimenting and coming up with new things. Because of this, I made a concerted effort this last move to trim down my cookbook collection. I mean, enough is enough, right? I’m not the cook, and yet, I’m responsible for a fairly heavy box come moving time! So, the cookbooks just for bread? Gone. The one for restaurants to which I’ve never been? Donated. The County Fair cookbooks given as a joke? Gone – although I sigh a little sadly that I’ll never be able to make my own funnel cake. (Eek.) What I’m left with now is what I want to have in the kitchen: great Asian food. Food cooked with fresh herbs and food from the harvest. Food for fun lunches and parties. Food commentary by Alton Brown.

And the cookbook Mom gave me. Which — shhh! — is the only one I really use. 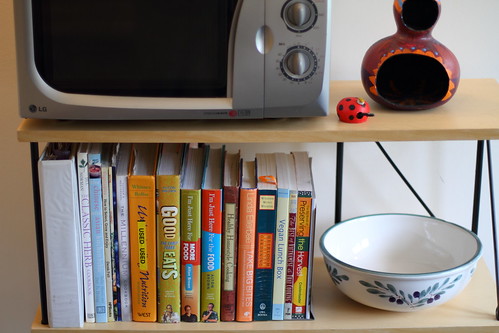 For the books of instruction and the font of ideas which line my kitchen shelf – and which I routinely ignore in favor of the one my mother gave me – I am grateful. Hopefully this gratitude will translate into me becoming a much better cook someday… Or not.