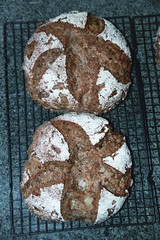 “Daily” bread. Hah! I wish. Actually, no I don’t. I’d turn into, as my friend Eli says, “a telly tubby” if I baked fresh bread daily. We bake it weekly, or at most, biweekly. (Or, fortnightly, as people say here. Which sounds much less frequent.)

Overnight, Tech Boy sets a poolish to gently fermenting on the counter. The following morning, I stir in a quarter cup of flax seeds (or linseeds as they’re called here. Yes, you can imagine shopping was great fun at first), or oats, about six cups of flour, and leave a massive, sticky ball of sourdough to raise. An hour or so later, Tech Boy divides the ball into loaves, rounds, baguettes or pizza, and in their oiled pans/bowl/dry stone, they raise another hour, and into the oven they go.

A simple team effort, to fill the house with the glorious smell of freshly baking bread. 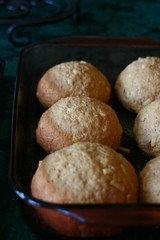 I often imagine being in one of those cultures which makes bread every day (including that elusive tribe of People With Bread Machines). Flat breads, tortillas, lavash — a little labor-intensive, this daily bread business, but oh, the smell. And the end result, smeared with butter and jam, pb&j, or topped with melty cheese and tart, crisp pears or rings of yellow bell pepper, onion jelly (another one of those “only in the UK” things)(it’s like chutney)and sharp regional cheese … 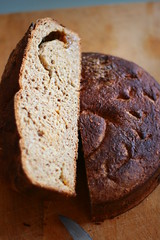 I have to restrain myself around fresh bread, and limit myself to no more than two (thick) slices. Somehow, when it’s hot from the oven, there’s a peculiar alchemy within the brain which insists it must all be eaten now, while it’s fresh. I ignore that part of my brain now…

I know people who don’t like bread. I know people who turn up their noses at it, baked fresh in braided coils, loaves or in baguette. But, carbohydrate calories aside, symbolically and literally, bread is the stuff of life, and the “dailiness” of the bread, which we might set aside as the stuff of boredom, or take from our table, for fear of courting bulges, is the simple food that, in varying forms, feeds the world.

Bread or roses – in a country of wealth, we can have both. For me, bread suffices for both beauty and basics. For the grace of a need supplied in a most luxurious way – with such a heady fragrance, and such a hot and toothsome mouthful, I am truly thankful.

We need no barbarous words nor solemn spell
To raise the unknown. It lies before our feet;
There have been men who sank down into Hell
In some suburban street,

And some there are that in their daily walks
Have met archangels fresh from sight of God,
Or watched how in their beans and cabbage-stalks
Long files of faerie trod.

Often me too the Living voices call
In many a vulgar and habitual place,
I catch a sight of lands beyond the wall,
I see a strange god’s face.

And some day this work will work upon me so
I shall arise and leave both friends and home
And over many lands a pilgrim go
Through alien woods and foam,

Seeking the last steep edges of the earth
Whence I may leap into that gulf of light
Wherein, before my narrowing Self had birth,
Part of me lived aright.

May you find the extraordinary in the ordinary today, lemon cake, where you expected merely your daily bread. More extraordinary poetry hosted at The Opposite of Indifference.

Poem by Clive Staples Lewis, from Spirits in Bondage: A Cycle of Lyrics London: Harcourt Brace & Company, © 1984. First published in 1919, when Lewis was twenty, a far-too-young veteran of WWI, and an agnostic.