Felicitations, this fourth day of the Omer, smack in the middle of Passover, and the opening act of the three-part Easter celebration for all of my Jewish and Christian peeps. If none of those celebrations is for you, it’s also Earth Day, wherein we celebrate the dirt and the trees and the nematodes, and the things from the natural world which sustain us, and try not to mess it up any further. Still not enough of a party? Right – it’s also still National Poetry Month, which means you’re in the right place for a poem.

It’s probably a little quiet around the blogosphere today, but poetry is still out there all over the place. I checked this morning that The Great Gregory K’s Kickstarter Poetry: Spread the Word is 76% funded, with seventeen days left. Read today’s poem for his 30 Poets, 30 Days celebration – and consider of all the reasons why it’s really important to keep poetry programs going in schools across the states — and then, give what you can. Thanks!

Last week, our young poets were ladies who have made friends with their vocabularies. They painted word pictures of Mare and really nailed some of her best attributes as a teen and as an adult. Today our poet is Zack, whose collage is filled with pictures depicting the time period of MARE’S WAR — but with a focus on war. As before, the poems are copyrighted to the individual poets, which is why they are only being shared as-is on their collage sheets — please respect the integrity of the poets, and do not reprint these ANYWHERE without their permission. Thanks. 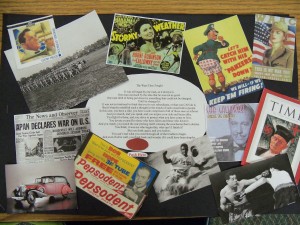 You might think that a poem about war is not exactly a poem that fits MARE’S WAR, but it matches perfectly. There were two wars discussed in the novel – the World War II conflict, and the war that the African American soldiers fought for respect and equality within the military and within their nation. Zack takes the time to look at the background conflicts that prefaced MARE’S WAR from a variety of ways. Without naming names or positions, he clearly observes the grievances of the Axis nations, its charismatic leadership, and its eventual plunge into conflict. He then seems to turn to more personal reflections on disputes and how fighters struggle to make peace.

It was all began by one man, as it always is./ One man incensed by the idea that he was not as good./ One man tired of being put down by something that could not be changed./ Until he changed it.

Just like that, we have the set up for a disenfranchised people coming together with a grievance, and demanding something happen. In MARE’S WAR, the Axis nations felt put upon and Germany felt cheated by WWI sanctions against them, leaving them an impoverished and bitter nation. One German leader who could stand up and make a difference for his people chose to do so. Too bad he made so many other poor – murderous, and downright evil – choices along the way.

My favorite lines are about the futility of conflict: And you watch, you watch the war prolong itself, missing the conclusion that it desires./ You think, it was me who began this, why can’t I finish it? Conflict, bad feelings, and war is like a ball rolling downhill. Once it picks up speed, there is often no stopping it.

This is a serious poem with a grim topic, but I’m grateful that Zack shared it with us, and did some deep thinking on a subject which affects us all.