Last week for our Grade 6 Poetry Project, we were introduced to the Oakwood School’s collage poetry assignment, and explored the perspectives of two fine poets. Ethan and Alan wrote about MARE’S WAR and Mare’s relationship to her mother, and the structure of her world. This week, poets Claire and Emily use their extensive vocabularies to speak about Mare as sister and daughter – hopeful, persevering, and tough.

As before, the poems are copyrighted to the individual poets, which is why they are only being shared as-is on their collage sheets — please respect the integrity of the poets, and do not reprint these ANYWHERE without their permission. Thanks. 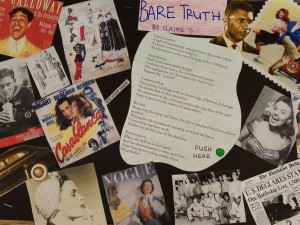 Claire S. grapples with language and nuance in her six short poetic vignettes under the title of Bare Truth. In each poem, Claire unpacks the theme of truth as encountered in various portions of Mare’s life. My favorite lines are:

“The segregation of a homogeneous democracy/Supposedly. United?”

This brings into question the idea of a unified United States, a question that the survivors of segregation and racism have no doubt encountered repeatedly.

Early on in the poem, a “murky abyss” is encountered, and poet Claire gives us the metaphor of Mare emerging from this place, rising above it and persevering. The abyss, of course, is prejudice.

Mare’s Family Rendition is also separated into brief sections, using evocative, descriptive language to define the characteristics of the cast of MARE’S WAR. Poet Emily truly sees Mare’s relationship with Feen, describing her as “the light at the end of the tunnel,” and Mare’s purpose. I like that she also describes her as a listener, the someone to whom Mare can tell all of her stories. This really shines a light on the bond of their sisterhood. 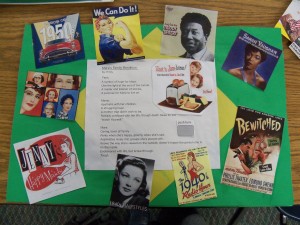 The catch phrase, “watch yourself,” comes into play again for Mare’s mother. I find it fascinating just how many of the poets latched onto that phrase and rolled it over their thoughts.

From poet Emily, the final word on Mare is simply “tough.” Which is exactly what she is.

One thing I find intriguing is that few of the poems make mention of the “Now” sections of the book. Tali and Octavia are mentioned once as innocents with no bias, in Claire’s poem, but otherwise, most of the poets are silent on their input. Perhaps it is because the granddaughters, as listeners to Mare’s stories, are sitting next to us, the readers. Hm. Anyway, tune in next week, for a bit more poetry and chat, and some creative examples of Americans in the 1940’s through collage!

Poetry Friday today is brought to you by the number three, and the letter AWESOME, and is hosted today at Random Noodling, who made the mistake yesterday of introducing me to the animated Pearls Before Swine. I may never get any work done again.