Poetry Peeps! You’re invited to our challenge in the month of August! Here’s the scoop: Get on your flippy poodle skirts, your tough leather jackets and penny loafers; we’re going to The Bop. A form created by poet Afaa Michael Weaver at a Cave Canem summer retreat, this is a poem with three stanzas, each followed by a single repeated line as a refrain. The first six lines presents an issue, the second eight line stanza discusses it, and the third six lines resolves it, and/or discusses the failure of resolution. Are you in? Good! You’ve got a month to craft your creation(s), then share your offering with the rest of us on August 26th in a post and/or on social media with the tag #PoetryPals.

The truth is, I never really give acrostics much weight as a poetic form – even phrase acrostics. It’s possible it’s because they’re so often used as elementary school art projects, where every kid finds a positive word to go with each letter of their name. Though I do like them, and the Poetry Peeps and I have messed around with them before, they’ve never really taken off as a form I’ve mastered. They’re simple, but… sometimes a little too regimented for how I’m feeling.

When Tricia selected a poem for us to take a line from for our poems, I think we all thought, “Okay, taking a line from a poem we already know? This’ll be easy.”

Yeah, that just shows what our past selves knew. No. No, this was not easy. In fact, using an utterly iconic poem like “Still I Rise” was immensely, fiendishly challenging. Additionally, a few of us found it difficult to separate the poet’s intention from our own poem – especially a well-known poet who lived during our lifetimes. This is Ms. Maya, y’all. This poem has spoken to generations of people with clarity and joy – we surely weren’t going to mess with that.

…well, obviously, we did, though I will say the good thing was that we read the poem repeatedly. I made it hard on myself by pulling the second-to-worst line in the whole thing to work with (the first worst is about having diamonds between my thighs; I’ll happily leave that one to someone else). A random line would work best, I thought, so I closed my eyes and picked…”You may kill me with your hatefulness.” …Great.

I did try to write from that line. I got halfway through and it was getting both long and depressing, and the internal rhyme felt forced. I tried a double acrostic, but those work best with really short subjects – which wasn’t what I was working with. I had to go away and come back several times and fiddle, fiddle, fiddle with word choices and order. I don’t often write a poem I’m happy with in a single sitting, but usually I can at least manage an entire draft. Not this time!

Finally I gave up, which was honestly the wisest choice. I don’t think I can write a good poem about hatefulness yet – not the way I tried to approach it. (ETA -*And here is where I forgot it was supposed to be a PHRASE acrostic…. oops.) Frankly, I’m sick to death of people’s hatefulness and could do without all that for a bit, so I switched to the important and meaningful part of the poem to me – “But still, like air, I’ll rise. Get on with your trifling hatefulness anyway. I’m over it – literally. 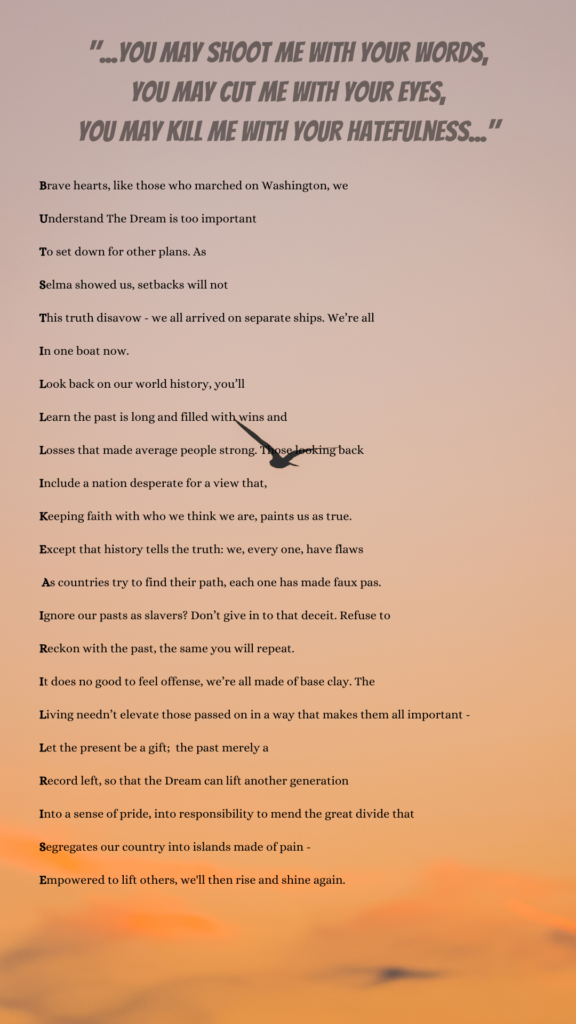 One of the ways I worked on creating rhyme within the confines of an acrostic was to record myself (ugh) reading it over, and over, and over. Here’s the last recording I made – it’s a really helpful (if dorky sounding) tool in the poetic arsenal.

I still don’t like the title – it really isn’t much of one – but I’m thrilled I finished with something meaningful, grounding, and largely coherent. I’ll take it.

I’m excited to see what Liz has come up with, if Sara joined the girl gang, and what Laura wrote at the lake. I’m looking forward to finding out what Tricia dreamed up, which one of the probably forty-three that Mary Lee wrote she ended up choosing. Here’s Michelle K’s beautifully upbeat take, and here, Carol V. shares another classic acrostic. Thanks so much everyone for playing along! More Poetry Peeps will be added as the weekend progresses, so check back later for the full round-up.

Meanwhile, Poetry Friday is hosted over at Marcie Atkins’ blog. Thanks, Marci!

Even if you don’t feel like you’re rising above like air this week, don’t forget the poem also suggests that you can rise like dust. Dust or grit is central to the oyster’s pearl, to the clouds that make the rain, and to the fragile impermanence of a snowflake’s beauty. Even the smallest of us has impact and purpose. Here’s to finding yours. Happy Weekend.