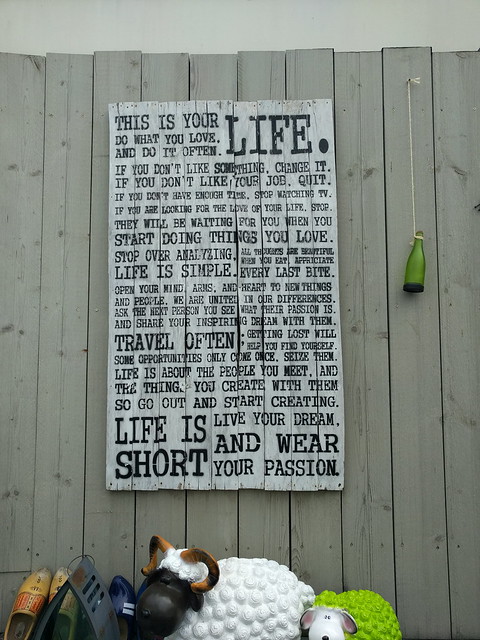 I never expected to be an older sister.

I spent long years being the youngest, a position loathed but familiar, before finally getting two younger sibs in one go, but little did I know that they meant my own position would change to that of Big Sister. This meant explanation, exhortation and most often, commiseration. And so it was that when my phone rang on Friday and my younger sister said, “Something’s happened,” and her voice warbled up in that tearful fashion to which I have become accustomed. I got comfortable, expecting the usual – a spat between she and Dad, or our eldest sister. Not today.

It was, she told me, at school, where she, with her cohort, are learning the ins and outs of the world of hair. JC keeps me up to date on the restless world of the Young and the Black-Clad, as all good Paul Mitchell-ites must be, and there is always some drama – so-and-so up and walked away from a client of hers and just left her hanging, so-and-so did a bad cut that the teacher had to rescue; so-and-so is the best colorist in the whole group, and is a little too proud of that fact. JC is a deft hand with the color bowl, and moved beyond doing wash-and-sets on the disembodied head of Maria the Mannequin to real human clients a little less than a month ago. Friday’s client was in for a color… and then abruptly took over the discussion on hair with a personal question.

“Why are you in a wheelchair?”

JC was the only physically disabled kid in her entire school, so she’s well accustomed to discussing her disability, and not at all uncomfortable with a quick explanation. However, the client wasn’t… satisfied with quick. She asked probing questions, and kept turning the conversation from the general to the personal. When she was finally draped and settled in her chair, and JC went to get her color, the woman asked the room at large, “Why do I have to have her? Can’t someone else do my hair?”

I imagine the room was uncomfortably silent. Afterward, the woman became uncommunicative and surly in response to questions and overall was a difficult client. JC’s confidence wavered, and she called in her teacher to finish for her… then a friend told her what had been said.

I commiserated, of course. I said how sorry I was that something like this had happened. I expressed my disgust with the woman’s ignorance, and her apparent belief that disability is contagious; I wished aloud she had received some home training. But, none of that fixes anything; in the long run, nobody can fix people. And, because I am so very bad at commiseration, I said, “And what’s your plan for the next time this happens?”

“It’s going to happen again,” I said, trying to be gentle. “Humanity is consistently awful.”

To no one’s surprise, she hung up a few minutes later, saying she was going to call Mom.

It was… maybe? the wrong thing to say? My sister, who was born with such birth trauma and such horrific birth parents and who manages with physical disabilities is still a mostly sunny-side-up type of kid. While I assume that there are going to be people in the world who are just generally ugly about things, she is horrified to find them. While she rolls through life assuming that doors will open for her, I trudge around with an axe. If it came down to wondering which of us was right the greater majority of the time, I’d probably say me… and she’d probably say her. Some sisterhoods are all things sweet and comfortable. Some sisterhoods have traveling pants. Ours, unfortunately, seems to have a cynical wedgie.

I guess this explains why I’m not actually great at this gig.

Regardless, I still think she needs to make a plan for next time. Because, in my experience, people will try you. We all know some folk move through the world looking for power exchanges, those moments when they feel like they can level up from the ground-floor misery that they feel they are by clomping on the head and shoulders of someone else to rise, even briefly. Everyone with a minus in a world that counts only pluses needs to have the tools at hand to lay boundaries for the way they wish to be treated and with kindness, insist on it. The Golden Rule isn’t meant to be a yardstick with which we smack each others’ hands, but a yardstick by which we measure how much we, too, are worth, and look toward treating others in kind. I want JC to know she’s worth being treated better, worth more than someone who has to explain or defend her choices or her existence.

Until then, Sister Cynic is practicing her shin kicking, in case Little Sister might need her.

One Reply to “{the sisterhood of the cynical}”