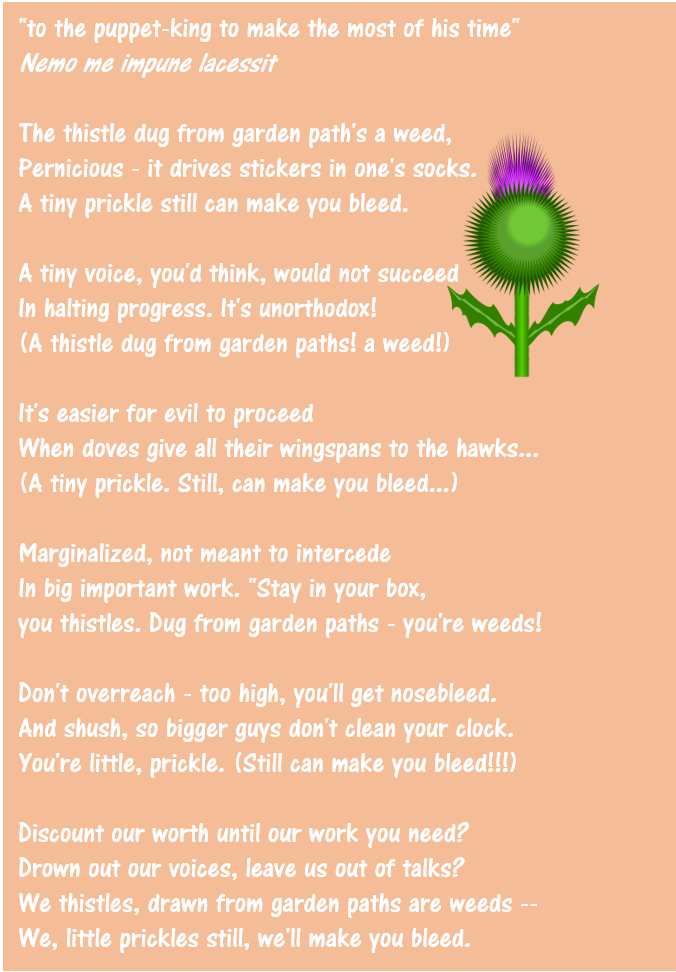 February already. What a long, strange trip its been in 2017. Each day I wake and… function. And feel such empathy for those who have to function in public, especially teachers, who have to shine and smile…but how?

Those were the thoughts with which I greeted the second month of the Poetry Sisters’ annual Year in Poetry challenge. This month is Kelly’s choice, and she compelled us to write a villanelle on the subject of brevity/shortness. Now, we’ve revisited the villanelle repeatedly, and it’s actually one of my favorite forms. But, having finished a revision the penultimate week of January, I found myself floundering and the spatter of acidic ink on all of those “orders” – from Hater-in-Chief and the Confederate Cabinet – ate my creativity for lunch. This annoyed me. I am a child of the 80’s who wrote bad poetry all the time in response to the tyranny of shoulder pads. I could do this.

The trick, it turned out, was volume, the same thing that worked in my tween years. I wrote TONS of awful villanelle, a form which easily lends itself to overstating a point. Sneer poetry? Is not nice. And I am so GOOD at it. I screeded, blaming everyone for everything. I showed no love at all. I recently started embroidering thistles, and they were enough to make me write about weeds, thorns, and bleeding (It’s a Glasgow thing. Nemo me impune lacessit, and all that. It worked for me. Don’t judge).

Eventually, after many awful poems marinated in sarcasm and mean wit, I realized that my biggest fears about brief time these days were about myself… and what I feared I didn’t have time for anymore, and was wasting time doing, et voilà. A poem I could live with. 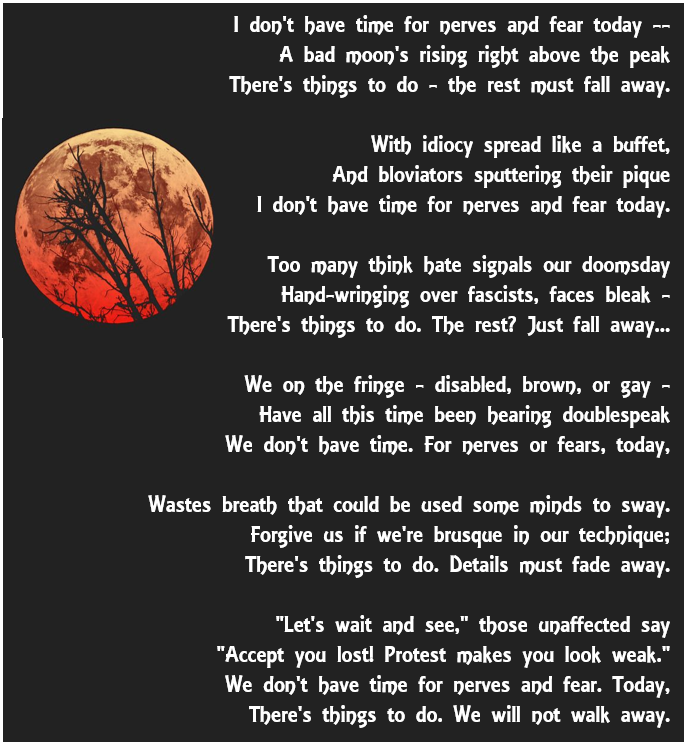 (And then, as ALWAYS happens, when I get something I can work with, something ELSE springs fully formed from the forehead of Zeus, with words I didn’t know I wanted to say which answer my original question of “how” – however, since that poem is wildly off-topic of our theme, I’ll share it later.)

If you’d like to check out themed villanelles from people who probably didn’t have to write ten run-up poems, and who can follow a theme without getting lost in their own heads (!), do see Kelly’s poem, on self-care which has to be a topical first; Tricia’s offering, Liz, in just under the wire; Sara’s “all too brief” rhymes and Laura’s, whose timely tweet to the gang, showing the poem in progress, put the spurs to us! (We’ll wave to Andi from our repeating lines, and see her next time.)

And for more poetry from poets who wrote and write during daily drudgery as well as intense moments of antipathy, don’t miss Poetry Friday, which today is hosted by Penny Parker Klosterman at A Penny & Her Jots.

The bad moon has risen, orange and malignant from the smoke in the air, as the garbage fire roars. Affix your breath mask and center yourself. You’ve got this. Go.