So, I’m one of the judges for the annual short story contest for my alma mater, Mills College, an urban liberal arts school which has a rich history (since 1852!) of educating women in the Bay Area. I’m the sole judge in the YA section, and I’m looking at graduate and undergraduate stories. Upper and underclassmen have to be judged separately, of course, and I realize I’ve been… stalling.

It’s funny – I don’t hesitate when I’m judging for the Cybils Awards, but somehow, knowing that these works are entirely unpublished, and that the writers are not just putting their words, but their hearts out on their sleeves causes me to …well, slow my roll a bit. In order to stop myself flailing, I’ve come up with the trick of reading the first paragraph of …all of them, in no particular order. And noting which ones stand out. 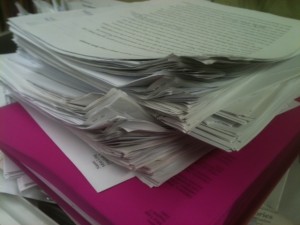 I’ve never been a proponent of ALL of the writing rules – you know, “write what you know” “kill your darlings” blah, blah, blah. I’ve ignored the rules, the ones that talk about the first chapter/first lines, not writing in first person (or doing so), writing disconnected from the internet, use a thesaurus, always stop when you’re in an action scene and want to keep going — I’ve pretty well ignored other people’s maxims, and put aside their Artist’s Way, their Bird by Bird, their If You Want to Write. Not that these people don’t have a lot of good things to say – they do; they’re brilliant. But, I find that I’m generally paralyzed by good advice – because I cannot take it all. However! I am now learning that when one is creating short stories – or at least short excerpts – the rule about the first three-to-five sentences? Applies. For me as a judge, examining just those first few sentences or opening paragraphs really shortens the flailing period significantly. First sentences — first paragraphs, really — count. They arrest and engage, or allow you to look away. I don’t want to look away from something that’s grabbing me with rising stakes. Obviously, I want to know more.

However, it’s not a guarantee of a good story — not in any way. The writer still has to get through the middle and the end of the novel, after a sterling beginning. It’s a frequent argument, in my writing group, about where a story starts — and there are always people prescriptively – but lovingly – trying to suggest, “You know, I think you should start the story THERE!” as if the previous six chapters you’ve written are full of nothing much of importance (and hey – they might be) – so a first paragraph doesn’t mean I won’t get bored later, definitely not. However — it certainly ensures my interest now. And “now” is all you’ve got to hang onto. Until the next now. And then the next.

*goes back to reading about a missing sigil in a spell, and the ensuing shenanigans which will result*