LEE AND LOW who, for years, have been publishing multicultural children’s books, even before it because a “thing” in the late nineties and the early-oughts, recently brought a simple – but complex – question into the blogosphere. WHAT is UP with the lack of diversity in children’s books? 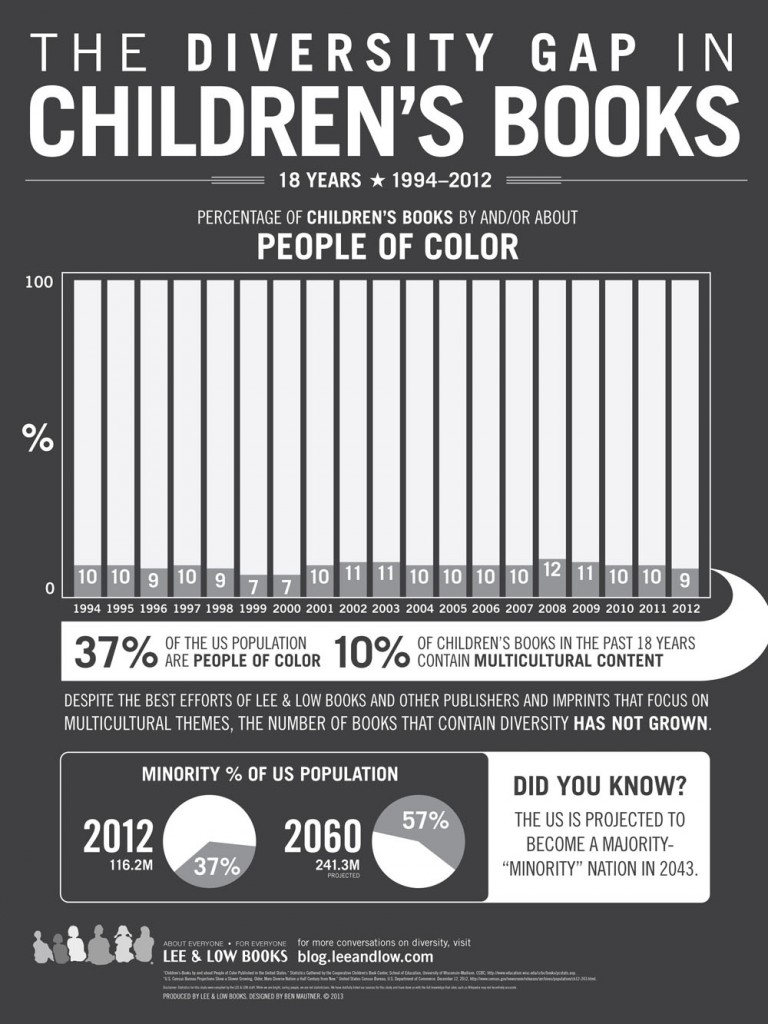 Way back in the Clinton era, First Book came with that question. They began to answer it by appealing for more books for younger readers – starting the little kids out right. Malorie Blackman, the black British children’s laureate said unequivocally that she’s going to be banging the drum for diversity, because for too long, Britain’s literature has ignored that Britain is no longer one color. So, this is relevant. It’s out there.

Yes, that question’s been asked before, but Lee & Low asked because they’ve now been in the business for eighteen years. Eighteen! And, as you can see, though they’ve worked hard and published more, and added Tu Books in as a SFF arm of their publishing house, they’re still but a little bump in the road, in comparison to what else is put out yearly by The Big Six (or, five, with Random/Penguin(s)). Overwhelmingly, fantasy stories, science fiction tales, spy adventures, mysteries, romances, historicals, easy reader, middle-grade, chapter books, and YA are plain, plain, plain, plain, white. Not Asian. Not Latin American. Not Hispanic. Not Native American. Not African American. Just the most culture-expunged, dominant culture, homogenous output.

This matters. Not because I am a person of color. Not because I don’t feel “comfortable” reading books that don’t feature people of color. But because the longer we tell young adults and children that they are invisible from their own imagination, the more we’re allowing them to disappear from the world’s stories. The more we’re encouraging them to be audience instead of actor, observer instead of participant. The more we’re saying, “Yeah, just sit back and plug in, and let the reality TV track of the world scroll past your eyes. There’s no room on the stage for you – just watch how others live.”

The piece itself (and please, please, PLEASE read it) has a lot of information from people I consider to be knowledgeable and savvy folk – librarians, professors, authors; people of color, taste, and education. And corporately and separately, they have a lot of reasons, but hardly a definitive answer. They do touch on a couple of points that ring true to me, though – one, we keep telling people of color that their books don’t sell – and don’t stock them? Well. You can’t sell what isn’t stocked. Two, there’s this idea that books by people of color are, like, homework and vitamins – things you’re supposed to have to have a well-rounded meal. Nobody wants the food they’re “supposed” to have. Everyone just wants good food. Until we can get over the “people of color as cod liver oil” idea that seems to have permeated American society, and the idea of “tolerance” – man, I hate that word, because all it means is “putting up with crap we don’t like,” instead of actually being loving and inclusive – this is where we’ll be.

And the point that hit me most of all: nowadays, just selling a book is harder. People are all about the new – you’re only as good as your next book, new authors are better than old, next big thing is better than what you loved last year, and readalikes to THE HUNGER GAMES or HARRY POTTER or whatever are all the rage. Writers of color, however new, are expected to produce …what? Not the next HUNGER GAMES, that’s for sure. The expectation seems still so weirdly strictured: poverty, slavery, history.

It’s actually hard, perhaps harder after winning a nod from the ALA, to write a book that feels “worthy.” That’s the word I’ve heard repeated: “worthy.” Roger Sutton kind of hit the nail on the head for me, when responding to this – that there’s an awful lot of earnest, good-for-you type of literature accepted from writers of color, and “we need more rubbish.” I’d say “rubbish” is his little joke, but the intent is serious. I LOVE MARE’S WAR. I will always love it, and the story that should have been commonly known about those women just trying to take part in what was supposed to be all of the country’s struggle. I’ll always love the process, the wonder, the discovery of those pages – for myself. But, I don’t love how long it took me to publish a book afterward, how my editor repeatedly told me that she wanted something more like MW, that I got the feeling that if I would only produce another work of historical fiction that doors would be opened to me. I actually felt like I was being stubborn for hoping to write science fiction, for dabbling in contemporary YA fiction – like I had to have a greater hook than other writers just to get in the game.

This isn’t me getting out my tiny violin and wailing sad songs – no, way. Getting published was a dream come true. Being published three times is the stuff of giddiness. But, in between those three publications were four or five novels which were shopped around and to which people said, “Well, they’re fine, but…” and could give me no concrete descriptions of that “but” meant.

My editor tells me that the time of the Contemporary has swung round again at last. Novels about real people with real lives and normal families with no fangs or fey blood in their family trees are on the rise. I will keep writing. I will also, however, hope for a couple of things:

*** One, that we remember that publishing is a business. They’re in it to make money. They are not in publishing for social reform. We cannot look to publishing companies to lead the revolution. People’s attitude about race and ethnicity in this country are as fractured as ever, and are reflected in the production of multicultural books. We don’t truly believe we’re all alike and sisters under the skin. We really do think – and it shows – that there are stories of “us” and then there are “others.” We need to stop othering, as a world, before we expect to see that from publishing. We need to get to know people from other cultures and skin colors, and truly accept that there is a commonality in the human experience. We all were embarrassed and horrified dorks during adolescence. We all had a rough “first love.” We all have had heartbreak. We’ve all had besties and worst enemies. We really are all alike.

*** Secondly, I hope we keep passing along good stories – stuff we’ve read that isn’t perfect, but is worth buzzing about. I’m not just talking about something as simple as choosing a book by a writer from another culture for your next book club or summer reading list selection, though that is a fab step. I’m also talking about talking up books to your local bookseller, and making some noise when they don’t have a book. “I’m surprised you’re not carrying _____. We have a really diverse community, and could use books like this.” We have to all be advocates for multicultural children’s literature.

*** Finally, I still hope someday to be a published SF author, and a mystery writer, and a heart-thumping romance novelist. I think we, as writers, simply have to keep trying.

A lot of thinking to do, yes, about this, and other things. But, more than that, a lot of writing to do. And, I’d best get back to it.