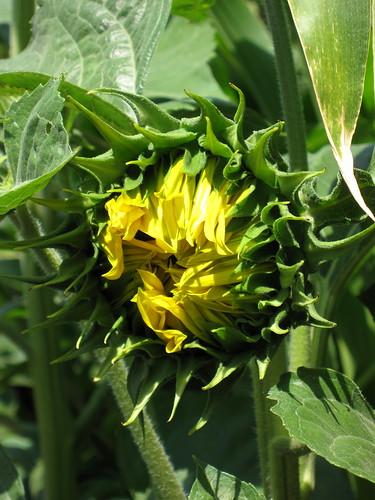 I can’t tell you how much I love furled flowers. The near-openness of a sunflower simply says “potential” in mile-high green letters, doesn’t it?

Here’s a bit of random factoid-ing to drop on you: In 1865 there were a series of laws passed called Locomotive Acts. One is better known as The Red Flag Act of 1865. See, there was this troublesome invention that had come along from America, and it was ruining everything for the stagecoach and steam engine folk. Oh, it was the automobile, and how the big industries back then hated it. But, only Luddites were against progress, so, in order to seem in favor of the thing, lobbyists passed this Act, which enabled automobiles to move safely… very, very safely.

See, for safety’s sake, the Red Flag Act mused, each automobile should come with a crew of three: a driver, an engine stoker, or mechanic, and a man walking in front of the car waving a red flag. Via Wikipedia: “Walking at least 60 yards (55 m) ahead of each vehicle. The man with a red flag or lantern enforced a walking pace, and warned horse riders and horse drawn traffic of the approach of a self propelled machine.” Oh, yes. WALKING. In FRONT. WAVING.

Because, that will keep cars on the road, yes that will. The sheer nuisance value was supposed to make that pesky automobile disappear.

Of course, history, and the advent of Mini Coopers, bears the rest of the tale – obviously, cars are here to stay, and change, no matter how badly handled or seriously opposed, comes to us all.

That’s been my “something to think about” for awhile. Change comes. I remember when Sara Zarr started blogging about her diabetes in 2009 and I thought, “Wow, that’s something so personal!” Blogging tends to show only the slimmest margins of who we are in our entirety, but Sara comes close to a kind of honesty in both her blogging and writing to which I can only aspire. I have been thinking about the kind of moves it would take to bring me to such an honest place, and then that topic of Change came up again. Oh, change. How we resist you. How we tangle you up with flag-waving heel-dragging. And still you bear down on us, terrifying us with your power to obliterate all the known.

I hate to change a thing, but, I have. I have made some changes, the smallest of which, like Sara’s, has resulted in accepting what I cannot change, in return for some renewed health, and some pounds falling by the wayside, lost, and hopefully this time not to be found again. It’s resulted in some decisions about dealing with my family, and my family-of-choice, and how and who I am choosing to be, from here on. It means I’m letting more people in. Conversely, it means, too that I need to take steps to leave some people out, to understand that they will not ever be able to take what I am and return what I need.

I’ve let off the stoker. I’ve benched the man with the flag, and have tied it to my bumper. My wheels have touched down to a new road, and right now, I’m the only one in the driver’s seat.

9 Replies to “{change, potential, and the man with the flag}”