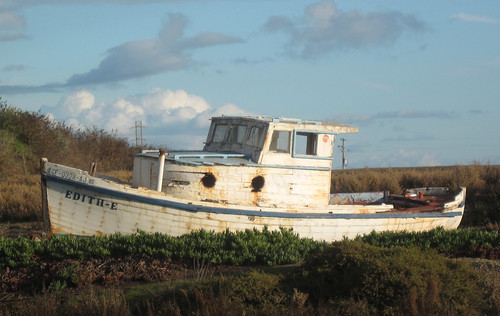 I have a friend who looks back over years and years worth of journals every year on New Year’s eve or day – looking back to smile – and sigh – that the more things change, sometimes, the more they stay the same. I have several journals that I move between, and my sketching journals amuse me the most because I can see that same pattern. Years ago, I was worrying about finishing this deadline, making sure that that story was just right, wondering if I’d ever attain this thing I wanted. I understand now more than ever that I am luckier than I believed.

I also realize just this moment I have a lot of pictures of boats run aground, boats sunk, and boats with holes in their hulls, listing to the side, no longer seaworthy. This is, in part, because it’s a lot of work to haul those things out of the water once they’re ruined, so there are plenty of them mouldering away into the bay. But, also it’s that I like them. I like the idea that there is no futility in no longer being fit to do what you did once; that there is still beauty and purpose to be found in running aground. Just a whiff of ephemera there, a bit of fancy, perhaps. Just a thought…

“Critics who treat ‘adult’ as a term of approval, instead of as a merely descriptive term, cannot be adult themselves. To be concerned about being grown up, to admire the grown up because it is grown up, to blush at the suspicion of being childish; these things are the marks of childhood and adolescence. And in childhood and adolescence they are, in moderation, healthy symptoms. Young things ought to want to grow. But to carry on into middle life or even into early manhood this concern about being adult is a mark of really arrested development. When I was ten, I read fairy tales in secret and would have been ashamed if I had been found doing so. Now that I am fifty I read them openly. When I became a man I put away childish things, including the fear of childishness and the desire to be very grown up.”
― C.S. Lewis

O, Clive, how we adore you. We shall embrace our toads and diamonds, our chicken-legged houses, our red-hot dancing slippers and our wicked witches with joy.

A flourish of the fedora and a click of the heels to Laini Taylor‘s very childlike blog for today’s quote.

It’s been a week for lists. Several weeks ago, I found I was being nominated to the 2013 Rainbow List, which is put out by the Social Responsibilities Roundtable of the American Library Association. The Rainbow celebrates books which positively portray LGBTQ characters. A wee bow to the ALA Rainbow jury – thank you for including HAPPY FAMILIES in such august company. Another tip of le chapeau to Suite 101, whose list of 10 Great YA Novels With Strong Characters lists MARE’S WAR at #7. Thanks, guys!

5 Replies to “{on running aground, lists, and adulthood}”