Today’s proverb is both ancient and Chinese, and though it might be cliché’s first assumption, it’s not written by Confucius. Surprise, there are hundreds more sages and creators of proverbs from this ancient culture! Today’s proverb is from the Tao Te Ching. Though this book isn’t found on B&N’s website in its entirety, it exists in various copies and dialects and is a widely studied, widely argued over classical Chinese text. The Tao Te Ching is usually credited to Lao Tzu, though others argue it was written by someone else, and is probably something from between the 4th and 6th century BC. It’s ancient. So, we have a genuine Chinese proverb, though the wording isn’t the same as we use now. Originally it said, “A journey of a thousand li (a traditional Chinese unit of measure, approx. 0.3 mile/0.5 km.) starts beneath one’s feet.” No one knows how or when, but as the quotation came West (probably because no one could figure out what a li was), the phrase turned into:

“A journey of a thousand miles begins with a single step.” 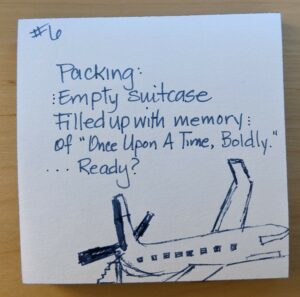 Go
Packing
Empty suitcases
Filled up with memories
Of “Once Upon A Time, Boldly.”
Ready?

PS – yes, I know I can’t really draw an airplane.