The Kelvingrove Museum in Glasgow, Scotland, may well be my favorite museum in the world. My first winter in Scotland, we went every Sunday, just to lay our eyes on something not gray, not dreich, and not our own tiny flat. And what a feast for the soul it was! Armor! Paintings! Disembodied faces! Gigantic elephants being chased by small planes! And my favorite sculpture, “The Harpy Celaeno,” by Mary Pownall. 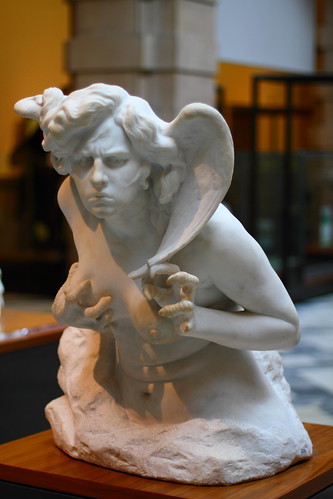 Just look at her. Really — look at her. She’s all scowls and claws, and wings up around her shoulders. Fierce and unsettled, yet her fierceness seems turned inward, somehow…

I chose this month’s ekphrastic image for our seven intrepid poets because – well, Hilary Clinton. No matter your political leanings, you’ve heard her disparaged based on gender. I chose a harpy because it’s one of the things Mrs. Clinton’s been called, one of a plethora of disparaging terms some people use for women. According to the encyclopedia, once harpies were known as wind harbingers. It was only later Greek myths which removed their beauty, added gender and put them in the position of reeking, punitive scavengers who thieved and carped and killed like a horrifically enlarged murder of sentient crows. They were made horrible, not born that way. 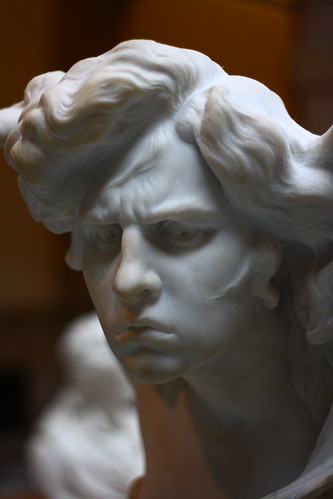 Ironic, isn’t it? Women were once respected as the hands that rocked the cradle, the ones who, of necessity, gave invention its place. We’re so in search of identity as a species, and so often threatened by any identity another assumes. Shrill? Stubborn? …Visible? Well, yeah. And, human, too. Capable of bringing the rain — or, in this case, the wind — and changing the world, one shrill screech at a time.

Heavens, no! Perish the thought!
A lady’s likeness should be sweet –
Rebellious scowls, shrill voice distraught
Provocative – and indiscreet…
Yield you to nothing, stubborn girl?
(one day she just might change your world)

(I had to get that acrostic out of my system. Still acrostic-ing from April.)

This sculpture chased round in my head. As it seemed to need repetition, I tried a villanelle. Rather than being for Celaeno, this is for Padarge, Aello & Okypete – Swiftfoot, Stormswift & Swiftwing, the original harpies from Homeric verse.

Once seen as pneuma, breath of god on wings
Celestial, beings heralding the gale
Now scorned as scavengers, polluting things.

Muscular graces of the zephyr, Spring
Our presence striking to those it impales
Once seen as spirit. Breath of god. On wings,

That spirit flees from those who to it cling,
Leaves grasping hands who by their brawn prevail
Now scorned. As scavengers, polluting things

Uncompromised, the scything claws could sting
All that would seek to hold this fierce female
Now scorned as scavenger. Polluting things

Best left to sons. The power of a King
Diminishing: all those who would him hail,
Once more with spirit, breathe, breath of gods, and sing
That strength once scorned inherits everything. 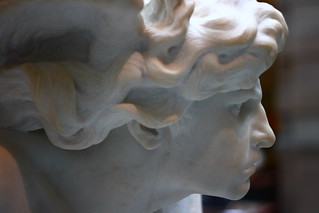 More poetry from the Sisterhood of Seven…harpies:

Laura wrote the harpy’s alabaster sharpness… in Taco Bell (CLEARLY hers is much nicer than any I’ve ever been in, since she can WORK there),

Tricia likened its claws to another clawed monster, cancer, then gave us another,

Sara played a wild marble instrument in a triumphant paean to claws and storms,

Kelly found some information on the sculptor which makes us wonder…

Andi’s sitting out this month, but will be back when she can.

Meanwhile, Poetry Friday is hosted today by Jone at Check It Out. Hope you have a lovely – fierce! – weekend.

9 Replies to “{poetry friday: p7 ekphrastic on a harpy}”