The Kettlemeister changed up the rules this week to include TWO pictures: from Flickr User Tom T and User hugovk. As always, the story is surreal and original, and dashed out in one sitting – those are my personal rules. I managed, if not a happy ending, a Kernel of Hope (TM). Hope you enjoy.

“Mail’s here.” Mabry’s words were barely intelligible through his mouthful of whatever – something gristly and crunchy and possibly insectoid. Jayce just nodded, giving his door wide berth as she walked to the landing and peered down. No sign or sound of her other brother, Toph and his slack-jawed posse of sharp-eared fae, so she moved down the stairs, avoiding the fourth one that creaked, hoping she could just grab a sandwich and vanish without any hassle. A heavy thump as she entered the kitchen put paid to that idea, and she sighed inwardly.

“Package came.” Toph’s chair wavered on two legs, his dark hairy legs in faded board shorts stuck out for balance. Glowing homemade-tatts wound around the bare arms which were crossed across his chest. With his model pure face covered in stubble, and his hair matted in elflocks, he looked Textbook Thug, or at least that’s the image Jayce imagined he hoped for. He needed something to make up for being beautiful, and driving a brick-pink Caddy.

She shrugged and laid two pieces of stale bread into the toaster oven. Keeping her back to him, she rummaged in the fridge, her skin prickling at his proximity. There wasn’t much – some limp cheese, and a bit of pickle. There were only two apples left in the fruit bowl. Jayce expected Ma to leave her a grocery list any day now.

“I said, ‘Package came.’” Toph enunciated the words and let the chair slam down on four legs. His can skidded across the table surface as he hit the edge. “You got something in your ears?”

“Heard you.” Though Toph was mostly a poseur, it wasn’t safe for her ignore him altogether. Mabry seemed so thoroughly spelled at all times, he managed to slide under Toph’s radar; Ma managed to unsee Toph’s thugging entirely, between swing-shifts at the glitter plant and sitting glued to the Netflix in her bedroom, mesmerized by ancient shows like Dynasty. Jayce alone was available to torment. Since she’d turned twelve and hadn’t been affected by the Dust, Toph had realized what she was – and what she could do for him.

“Well, go out back and deal with it.” Toph’s voice was rising into threat. “Don’t see why I hafta tell you every time.” 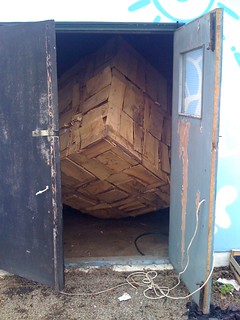 Don’t you? Jayce thought but didn’t ask. Instead, she picked up the pace – juggled blistering hot half-toasted bread in one hand, grabbed cheese, an apple, a knife, and shoved the lot into the voluminous pockets of her shorts and went out. The door closed on Toph’s satisfied, “That’s right, you ugly bi – ” and Jayce wished she’d slammed it just a little harder.

The shed wasn’t out back as much as it was somewhere inward – on a crossroad so it was both here and not there. They’d explained it once – something about ley lines and L-space, but Jayce hadn’t really been in a position to understand. She didn’t get magic, not like most people nowadays. The Dust didn’t touch her, didn’t transform her pug nose and round brown cheeks into Cadbury-plump richness, nor her dark brown eyes into tea-colored soulful depths. She was plain, short, dark -not mysterious in the least. Ma said Jayce was like her grandmother, one of those “salt of the earth” types, and she felt like it – rock salt, maybe. Something jagged and sturdy and necessary. Not like the fae, who simply exuded beauty and sprinkled it on their fawning humans. Not like Mabry, who wafted vaguely through the halls, his attenuated presence known more often by his absence, not like Toph, whose surreal good looks he roughened offhandedly, as did his peers. The magic wasn’t magic, for Jayce – merely work. Only Lightboxes packed with vials of dust to be weighed and parceled into packages, only a cloying sweet irritation on the back of the throat, and something to be showered from her hair.

She’d been at it for an hour at least when her ears popped. Crouched as she was over a Lightbox, tethered to make its lighter-than-air contents stay reasonably close to the floor, she had no time to move before the Crossroad spat out another traveler. The large head and massive eyes were infantile and designed to elicit human attention. The body was stunningly adult. In her spring-bright dress and thistledown wings, Jayce knew this fae before she even spoke, before her fixedly bright expression met Jayce’s wary gaze. Tinkerbelle. The most viciously sweet of the lot.

Bells rang. Jayce grimaced and shook her head. The stupid chiming got under her skin like an itch, and she shook it from her head. “I can’t understand you,” she said, her voice a tuneless flat contrast.

The bright jingle again, and the fae turned her head slowly, eyes wide in her waxy pale face. Jayce shudder, reminded of the multifaceted eyes of a spider in her science text. Even Toph’s crowd was less off-putting, eyes half-mast from their smoking, somehow managing to look a little less mannequin-like with their dyed wings, guyliner and gelled hair.

The fae’s wings – somehow strangely one dimensional – flickered and she moved toward the house, the chiming somehow adamant, louder, sharper. Jayce dropped to her knees and hunched, working her thin latex gloves from her hands to shove her thumb over her ears. Never mind the packing now – the fae’s speech made Jayce feel like she was being divebombed by flying fire ants. She hummed – her only defense – off key and more drone than song, until the itch in the lining of her brain settled to a slightly miserable sting.

Her humming was less frantic now. Shaking, Jayce picked herself up and leaned against the wall, wiping a disgusted hand over her clammy brow. She looked ridiculous, she knew – ashy with Dust and marked with sweat. The fae didn’t like sweat, didn’t like bodily fluids much at all, really. Despite the humans who worshipped them, fetishized them, longed to intertwine with their perfect bodies, the fae considered themselves the mortals’ betters in every way. Only the young mortal-corrupted fey dealt with human bodies, with their sweat and their stickiness. Tinkerbelle was beyond those things, and Jayce knew she’d better get out of the way, before the thing came back. 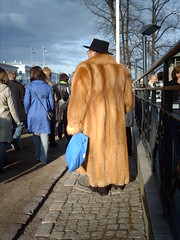 Which she would, if she could just stop shaking. Why would she come here? Toph always drove to her, always took her where she wanted to go, always came home with the treats, the car, and the friends. Why come to him, to the dull, dim house where his mortality shone so plainly?

The magic might not hurt Jayce, but she hated the fae. Hated their flawless faces and airbrushed bodies, hated the world they’d foisted on humans obsessed with beauty and perfection, hated the life she lived on the fringes – permanently flawed with no hope of redemption. Seeing the fae in her own home made her feel it all too closely, what she lacked, her deficits. She was all too human.

“All right?” Mabry’s hand touched her back. Jayce sucked in a breath and flinched; he must have called her more than twice by now, and she hadn’t even heard him come in.

“All right.” Jayce licked her lips, spat away the cloying sweetness. “I’m fine.”

Mabry pulled Jayce out of the shed and to the side of the back steps in time to see the door burst open, and Toph stumble out, nearly falling. His face devoid of stubble, his locks smoothed into waves, and his eyes wide with anxiety, he was followed by the fae, who stood on the top steps and chimed imperiously. Too close to hum, Jayce grit her teeth, and Mabry gently covered her ears with his palms. In his uniform of fox fur coat and brimmed black cap Toph looked nothing like the Textbook Thug he tried to be. Instead, he looked like Tinkerbelle’s Dust dealer as he rushed to the shed, emerging with the packed vials in their brick-pink cases, to be delivered to the beauty-addicted mortals in the City.

“Lackey,” Mabry murmured, as the fae followed in his wake. “Only a lackey.”

It was meant to reassure; Mabry knew Topher tortured her, but the words still rang hollow. Yes, Topher was a lackey, but what did that make the rest of them? Mabry, fae-kissed and skimming above it all, Ma, with her willful blindness and her wish-fulfillment TV, Jayce, skulking around the edges of her life, doing what she was told? Even Tinkerbelle answered to someone, to the King of the Fae, or the White Queen. Didn’t they all belong to somebody? Jayce stared down at her Dust-encursted hands, chilled now that her sweat had dried. She wasn’t bespelled, not like Mabry; she didn’t see the world through rosy lenses. They were all slaves.

But, maybe it wouldn’t always be that way.

The Cracked Kettle site is UP! Please check around and see what the rest of the gang is up to this week.

2 Replies to “{the cracked kettle: deliveries}”