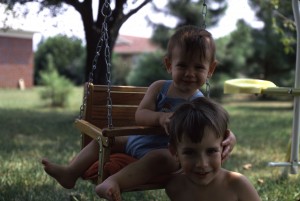 (A photo of Tech Boy, before reading much of anything other than the bumps on his brother’s head.)

Today I am mindful of those who have played their role in making us who we are.

One of the things Tech Boy and I have done since we got together is read aloud to each other our favorite books. Obviously, some books don’t lend themselves to this, but most of the ones we loved as children do – which is why the Tolkien series and much Pratchett has come to stay. These books lend themselves to being taken in over and over again.

When Maurice Sendak died last week, I was sad – but also relieved that an irascible old man who often spoke frankly about anticipating his death was allowed to go so peacefully. This past month commemorating the life of Diana Wynne Jones has been different – because I felt she had more stories in her, and want to set STUPID CANCER on fire for taking her too soon. However, this week, hearing of the loss of Jean Craighead George makes me sad – but smiley. She was one of the life-shapers, for Tech Boy, and she died after a good, full life, at 92.

If you’ve never read MY SIDE OF THE MOUNTAIN, or any of Jean Craighead George’s other books, you know her work focused on independence and interdependence in the natural world. Sam Gribley is one of a family of eleven, stuffed into a too-small urban space in New York, and he hates it. His father hates it, too, and Sam is raised on stories of being at sea, and of his great-grandfather’s exploits in the Catskills. Sam thinks, “Why not me?” and with a ball of twine, some flint and steel, and a little money in his pocket, he sets off from New York City to live out a dream. 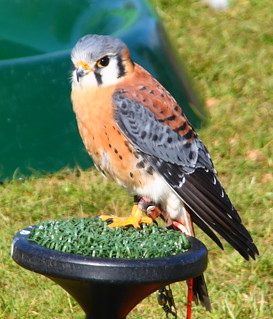 It is stunning. It is terrifying. It is occasionally hilarious. Sometimes it is a flat-out disaster. But, it is life, and it is all Sam’s. No one else deserves either blame nor praise for his survival and his mistakes.

Tech Boy ran away from home after reading this book. He got down to the avocado tree at the bottom of the road, and wasn’t sure where to go next. The Catskills are a bit far from Southern California, after all. Eventually, he went home, but what stayed was the little wild spot in his heart that wanted to live outdoors. He wanted to track bats, to whittle fish hooks and have his own peregrine — and he still wants that peregrine. These books created the person who tracks down lizards at Joshua Tree and faithfully remembered to bring back rhinoceros beetles and lizard skeletons to his junior high science teacher – years later, from Mexico. Jean Craighead George gave her readers a way to enter into her books, to enter into the wild world, and find a home when the home they had might not have been working for them so well.

So: acknowledgement. Jean Craighead George, you meant a lot to so many. Thanks for everything.