On with the dance! let joy be unconfined;
No sleep till morn, when Youth and Pleasure meet
To chase the glowing hours with flying feet.
~George Gordon, Lord Byron, Childe Harold’s Pilgrimage

This weekend I helped Tech Boy give a gift to a friend – by attending the epic wedding of his friend Axel and being the on-the-spot photographers, as our gift to him. It was an epic wedding because a.) it’s Scotland, and Scottish parties are epic, b.) Axel is Romanian, and Romanian dances are epic c.) it lasted for two days, and many, many hours.

I am an introvert, socially backwards in some ways, and sometimes weirdly shy – so there were parts of the whole thing which made me break out in a sweat, including waltzing into the bride’s dressing room and photographing she and her attendant getting ready (I’d never met her, so, our introduction was, “Um, yeah, hi. Don’t mind me, I’m just here to photograph you while some random chick puts lipstick on you. Just ignore me, thanks.”). There were also some moments which were beautifully surreal, which included the Greek orthodox service with the cantor and the icons and the marching around the altar three times, and the crowns – the bride and groom are crowned in an orthodox service, which, along with the sugar cookie (well, they looked sweet) wafers they got to eat (which represented the sweetness of marriage or something?) was just great. But the moments I loved the best were the dancing.

I was raised not dancing – I’ve never sat through (READ: Suffered through) FOOTLOOSE* (thank-you, Leila), but I’m told my life ran a parallel to the theme – churchy folk Just Didn’t Do That, because dance Led To Other Things. The only difference is a.) I’m not an angsty 80’s boy, and b.) I figured I was too physically awkward to worry about dancing anyway. But, that’s not strictly true. I think not dancing, seriously, takes something away from a person. I’m not talking grinding or freak dancing or whatever – please — but to not dance — as families, as generations, as people — is to miss a pair of middle-aged women attempting the Virginia Reel and ending up in a breathless giggling tangle – or to miss being the groom quick-stepping his mother around the floor and singing with her some silly ABBA song, and to miss first-date couples and grandparents and shy Scots boys paired with shyer Romanian girls attempting cèilidh dancing for the first time, trying desperately to remember which way to step, hop, clap, and twirl. To not dance would be to miss all the suddenly unselfconsciously delighted Romanians of all ages — resplendent in their kilts — who ran shouting out onto the floor, arms raised, at the first strains of their traditional music.

It was joy in action, celebration embodied. And I felt crippled that I couldn’t stand up and join in. (I know I technically could have, but I was working. I wasn’t really a guest. And, remember: socially backwards and weirdly shy.)

When I was in college, I remember reading William Carlos Williams’ The Dance, and looking up the painting. I giggled at the words — he was so right about the round butts and heavy shanks — and this weekend I remembered again the circular phrases that remind me of the dances – running along, laughing, stepping and trying to keep up with the crazyfast Romanian circles, or the amusingly named Dashing White Sergeant in the cèilidh – all stumbles and laughter, wild twirling and stumbles — learning grace with a slow, slow, quick, quick step. The laughing, the swinging hips, the stomping feet — all of those images swirled through my head. So, these are my fantastic memories of someone else’s celebration – and a reminder to learn to uncripple myself and join the dance. 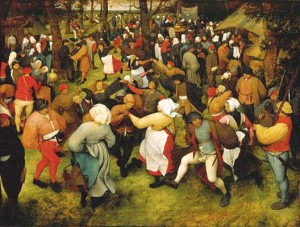 ~ by William Carlos Williams~
In Breughel’s great picture, The Kermess,
the dancers go round, they go round and
around, the squeal and the blare and the
tweedle of bagpipes, a bugle and fiddles
tipping their bellies, (round as the thick-
sided glasses whose wash they impound)
their hips and their bellies off balance
to turn them. Kicking and rolling about
the Fair Grounds, swinging their butts, those
shanks must be sound to bear up under such
rollicking measures, prance as they dance
in Breughel’s great picture, The Kermess

* Okay, here’s the scoop on Footloose, which, I am told, even THE JOSH thinks is a good movie. The Josh has many weird tastes in things and has dancing Kokopelli etched on the stock of his gun, so we don’t actually TRUST his opinion, only Leila’s, but nevertheless, let me tell you why I’ve never seen this: A#1 Reason:) the music. Okay. It’s fun, catchy, whatever. But. I had this Eeeeevil Aerobics teacher, pre-Zumba days, when people still did plain old aerobics. She made us do this… well, it can only be called a chicken dance thing — complete with rapid, full-extension can-can kicks, arm flailing, and side hops — to the title song to this film.