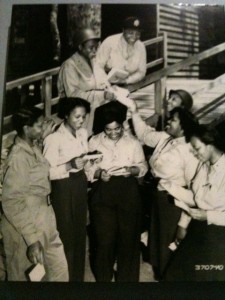 Intrepid librarian Jennifer at Now Taking Requests, passed this picture of some WAC’s of the 6888th Postal Battalion along to me, which she took at the America at War exhibit at the Museum of American History. Thank you, Jennifer! This is a truly awesome picture, and one of the rare ones. It’s obviously posed — people who actually work don’t stand around beaming at each other, usually — but it’s still so great of a find. Especially cool is the example of their uniforms; check out the sand-colored, belted “utility” outfit, in which the WACs worked in when it was cold – which it was, most of the time, in England. I wish I had made it to that exhibit. Oh, well. Next time!

After a busy morning, a few of the usual suspects met for lunch in the food court above the exhibit hall. Kelly Fineman, Tricia Stohr-Hunt, Laura Purdie Salas and Tech Boy scarpered off to find out if anything was good, while I dropped my bags and sucked down as much water as I could. To my surprise, Kelly came back with Laurie Halse Anderson in tow. (Kelly is friend with just everyone, which makes attending a convention with her awesome.) She sat down and proceeded to chat with us about anything and everything, and in the course of that desultory conversation, she passed along some good advice.

Laurie mentioned that when she first wrote Speak, everyone thought, “Ooh, awesome. We can expect more of the same.” Well, if you’re a L.H.A. fan, you know what came next — the riveting, can’t-put-it-down-ugh-gross Fever, 1793. Her publishing house — after all the praise and awards heaped on Speak — was not thrilled. First a gripping YA novel, and now a kind of middle grade novel that has the phrase “Bring out your dead” in it? The publishers could just not see it. Fever was repeatedly rejected, and Laurie had to change houses in order to have it see the light of day.

And of course, once Fever debuted, I’m sure her original publishing house must have been kicking themselves, as it was a critical and commercial success, and it’s been turned into a stage play, I understand. But the real point is that Laurie learned it was easier for publishers to “get” her if she divided her work — her straight YA novels go to one publisher, and her MG historical fiction goes to another. (The Zoe picture book she describes as “pure silliness,” and it doesn’t exactly fall into any category, but who knows? Maybe she’ll write another and start a new grouping.) Thus the publishers don’t feel like they have to worry about whatever novel follows a spectacular hit like Speak. Laurie’s “brand,” or what have you, is safe, at each publishing house.

As my editor has passed on two novels now, since MARE’S WAR, and has indicated that they need to be of a certain “caliber” in order to follow Mare’s path, I’m wondering at the wisdom of continuing to pitch things to her which are not specifically a.) historical b.) stories which include grandmas c.) stories about a single character who faces specific odds and achieves, in her own way. I am very much aware that people love, love, LOVED Mare, and while I enjoy writing historical fiction, I’d like to write all kinds of things — frankly whatever bubbles up in my brain. I don’t like the idea of branding — although the ladies at Shrinking Violets came up with a good discussion on it recently — and realize that maybe there’s another “home” for my novels which include dual protagonists, siblings, guys, and, um, aliens. (Okay, no aliens. Yet.) I’d like to bounce this off my agent, and see what he thinks.

Right then. Back to battling jet lag (it’s a lot harder coming back five hours than coming back eight, for some reason. Travel in the winter is easier.) and considering how to get back to work.