You’re invited to try our challenge in the month of February! Here’s the plan: We’ll roll a set of metaphor dice and write a poem inspired by your metaphor. Don’t have metaphor dice? Never even heard of them? I first encountered them in Heidi’s Juicy Little Universe, and they were invented just a few years prior by the poet Taylor Mali. Interesting, right? If you’d rather not get metaphor dice, just use an online metaphor generator, like this one. Then share your poem on February 26 in a post and/or on social media – #PoetryPals.

Our first challenge of 2021 was to visit Merriam-Webster’s Time Traveler page and explore when a word was first used in print. Not invented, but printed – the first time a word was used in the United States, at least, in a print publication – a book, a newspaper or a magazine. To begin, each of us chose a year which was meaningful to us – for whatever reason – and went back in time before diving into poetry. There were no other rules.

Time Traveler is a big old rabbit hole, and I hope you take set aside some time to dig around and see what you discover. I chose 1973, and find it surprising that no one had said “underwire” or “bralette” in print until then – although, that might be because some objects of clothing were considered “unmentionables” not so long ago, even in women’s magazines. Just imagine – people hadn’t referred to “news person” or “anchorpeople” before 1973. Concepts like a “crumple zone” or an “ACE inhibitor” were unknown. The plethora of medical words first in print in 1973 indicates the number of discoveries being made – and shared – with the general public for the first time. And I was unsurprised to discover that words like “lockdown,” “super-spreader,” and “bunyavirus” (what even is that?!) were also there. History records, and our Time Traveler confirms: viral outbreaks and lockdowns are nothing at all new.

While forty-eight years ago, no one had ever written about video games, urgent care, soccer moms, or televangelists, romance was, of course, alive and well (how else did we all get here). The clutter of Valentine’s related junk in my inbox (as frantic retailers try to make it The Next Big Holiday) together with the utter randomness of my 1973 word list came together in my head to create… a love story. Obviously. Because, what else would I write about? With apologies for the resulting cheesiness, I present to you…

A Love Story With The Worst Romantic Verbiage, Ever

Who would’ve thought when first we met
A deconstruction – of Chaucer! – made him a sure bet.

His factoid filled mind jump-started my heart
8 AM edutainment – he made snark a fine art.

I kept seeing him, sending me into hyperdrive,
My space-cadet heart barely kept me alive…

I was cash-strapped and stressed, held up by duct tape
Balanced on razor wire with no means of escape. 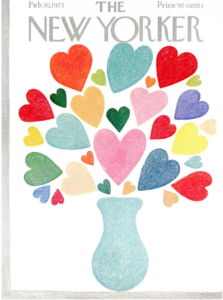 While reverse-engineering success, I could soar
But dating? No thanks! I was no revolving door.

So we were “just friends,” and he shared his moon-roof.
As it turned out, “mere” friendship was the burden of proof

That I needed. That swooning was not such a sin.
My heart broke its lockdown: I gave up! He was in.

(Don’t fact-check me, but there’s just the teeniest bit of history in this poem. Deniability is the name of the game!)

This list of words was both frustrating and hilarious. I started trying to use the fact that the words are presented alphabetically, but an abecedarian form did NOT work. I finally settled on blank verse, which apparently any Joe Six-Pack could do, but the disparate variations of meanings and sounds made me greedy – I so wanted to use so many other words, but — honestly! — this was plenty. I had fun, and that satisfies the requirements for this challenge. Want to see the other attempts of our stalwart crew of poetry peeps? Check out Laura’s. Right here is Liz’s. This one’s Sara’s. Find Kelly’s here, and Andi’s, and this is Tricia‘s. Cousin Mary Lee’s will eventually turn up here, and Michelle Kogan’s is here. More poets will check in throughout the day, so stay tuned!

Poetry Friday is hosted today by Jan at Bookseed Studio. Thank you, Jan! It’s finally safe to say Happy New Year to everyone – it’s the Year of the Ox! Here’s to stubbornly pushing forward on the things we need to do this year. Until then, keep your food processors busy, and your hot tubs sultry, and your Earth tones subdued. Happy weekend.