I suspect if I lived where it snowed anymore, the thrill would still be just as great. I’m talking about the annual Receiving Of The Seed Catalogues. It’s not as if I live somewhere it isn’t still relatively warm and sunny, and it’s also not as if I do anything but destroy gardens – but I do it with dedication. As one should.

Every year, the late autumn/early winter arrives with tons of catalogs – first the glossy garden catalogs with deluxe fountains, the copper door wreaths, patio lanterns and bird feeders, and then the pages of bulbs and flower baskets. Finally, late winter the catalogs come with the glossy pictures of seeds — or, even facier, the pages of buff, pen-and-ink sketches of Asian plants and vegetables I’ve never seen, but order anyway. I buy seeds or seedlings every year, and something – aphids, raccoons, the stupid squirrels – inevitably eats them. Without fail, something munches on the eggplants, nibbles the tomatoes, makes lace of the kale and leaves little spit balls in the peppers (WHY do insects have to DO THAT? SPIT BALLS. Seriously). Add to that hauling water in buckets – the joy of living in a drought state and recycling shower warm-up water for the garden – and it’s a royal pain. 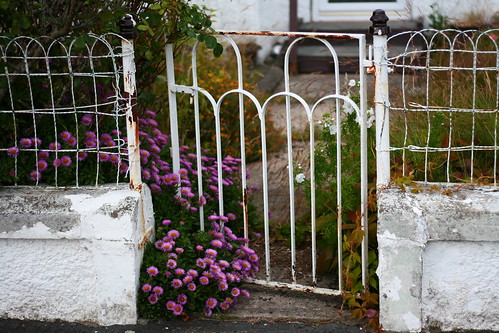 Occasionally, a sentient garden forces the door and escapes.

Is it just the gardening? The calm of being outside, perspiring under a ludicrous hat? Or is it, rather, the performance of optimism, the whole ridiculous dance of throwing out a seed, and working, hoping for the best? I don’t know. Still – grateful for it.

Mental Mood: It’s not Netflix & Chill. This week, it’s mostly Twitter & Weep, but little by little, the voices are sorting themselves. There are the tone policers, the pat-the-air-and-calm everyoners, the we-must-respect-the-office-of-presidenters. There are those already writing their congressional representatives about changing the electoral college, the organizers, the protesters, and the planners. There are others circulating petitions to ask that we ignore the college tally, for the sake of the republic. I’m hearing voices insisting that nothing will change – no one will be better off, or worse. I’m hearing other voices insisting that it’s all changed, irrevocably.

As troubling as it is to see how people’s vicious, racist behavior has red-lined already – especially at schools and colleges – we were warned about this by British friends; post-Brexit people acted like they’d lost their ever-loving minds as well. May we be among those brave enough to be unafraid to put ourselves between another and harm.