I’ve always loved the Navy Hymn, possibly because all the uncles on my mother’s side, plus my Papa, were all insufferably proud Navy men. This poem takes elements of that old prayerful song – allegedly sung onboard the Titanic by the last gents who went down with the ship, and by sea-going soldiers since the late 1800’s, and reframes its metaphors about dangerous passages and dark waters.

I was listening to the most recent podcast of This American Life and decided to post this poem because my “Oh, God, how are we supposed to deal with this” sounded remarkably like a modern take on – “Oh hear us, when we call to Thee for those in peril on the sea.” Sometimes, the seas of injustice seem so vast, and our boats like grains of rice against the backdrop of the universe. It seems like our country is this bizarre and unrecognizable place where these stories of injustice aren’t just the edge of an iceberg, but an entire ice-locked sea. What else do we do, but keep our heads down, hold hands, and ride out the rough waves? 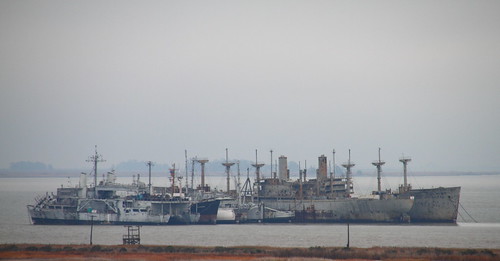 This frail bark reels through midnight’s raging roar
(The sea so great, oh God, this boat so small –)
Though rough the winds, they carry us ashore.

Like flotsam flung, against the rocks we crash
We, David, at Goliath’s mercy crawl
Though rough the winds, they carry us ashore

A spark from shore, the lighthouse. Warning flash,
Ignites a spark of cheer, our hope enthralls
As frail bark reels through midnight’s raging roar

And blinking free from mist and stinging splash
The ragged ship limps to its port of call.
Though rough the winds, they carry us ashore

At anchor’s fall, let struggles fade from view
Nor linger long on trials that befall
Our frail bark reeled through midnight’s raging roar;
Though rough the winds, they carried us ashore.