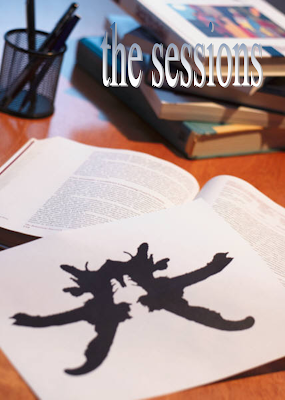 It is a classy room, with clusters of tropical plants in the corners, a selection of plush chairs, and a glass-topped table. The lighting is discreet, as is the box of tissues on the corner of the table. The expected couch is absent. She perches on the edge of a recliner, ankles crossed, hands folded primly. Her fingers are locked into a death grip, as she watches the silent psychologist writing, and writing, and writing on that accursed pad of paper…

What is it you want to know? Can I tell you my family stories? I suppose I could, but how much of what I know is true, I couldn’t tell you. Why do psychologists always ask these kinds of questions, anyway? If I understood my family, do you think I would be here with you?

What? No, I only mean that family is the basis of the mess I’m in.

No. Really. I’m not blaming them. That’s such a cliché.

Fine, fine – don’t start writing on that pad again. I’ll tell you everything I know.

I don’t know where I get some of these stories. My dad, in his rare moments of sociability, will tell a yarn about a hunter being treed by a bear, and of his whacking the beast with the end of his rifle. (Why didn’t he shoot it? That part is never explained.) The hunter’s wife stands on the ground a ways away, shouting to the hunter to see if he’s all right. The hunter deflects all offers of help. “Help the bear!” he shouts to his wife. “Help the bear!” My father would echo that refrain whenever my mother would offer to massage the knots out of his legs after a particularly hard workout. “Help the bear,” he would grunt, forcing his stiff legs into a painful v-stretch. “Help the bear,” we would mutter after he spanked us, imaging a grizzly ripping him to shreds.

What? I’m showing some signs of aggression? No, I’m fine. Don’t write anything on the pad.

I learned some of the other stories from my grandmother, who is famous for running her profanities together in a sort of palindromic cursing. “God dog it,” she says which is somehow, of course, funnier and more whacked than just saying damn, but to her, it is much safer than invoking the Powers That Be to do any damning on her account, thank you very much. I learned the story of the bathtub from her, how that girl bathed while she was menstruating, and something happened with the plug, no, the drain –

Forget it. It was one of those weird cautionary tale things anyway. My grandmother is scandalized with bathing while bleeding. She must fear that somewhere in the city’s sewer system we are breeding some race of über humans who will come and wipe us out. Kind of like that Alligator movie, only more interesting. When I speak to my grandmother on the phone these days, she nods off, or tells me of people who have died, people I never knew in the first place. “Oh, really?” is all I can say. I’m sure they died of that bathing thing.

From Willie, my great-grandfather, I learned the greatest stories of them all. No cautionary tales there, he told straight up lies, and I believed them all, ate them down like toffee candies. He used to sing the most ribald words to hymns in church, and sit there like a pious saint while we struggled not to laugh. Once he told me that the bubbles from dishwater would cause hair to grow again on bald men. I was little and bored with the company my grandparents were entertaining. After being primed, I duly scooped up a double handful of suds from my grandmother’s sink, and deposited them on my grandfather’s head, while Daddy Willie cackled away in the background like a madman. It is a testament to the inevitability of ridiculousness in that household that my grandfather didn’t even blink, just wiped the suds off of his neck and kept talking to his guests. He never even asked me why.

For myself, I was disgusted that his hair didn’t return. It never occurred to me to that hearing a story from one bald man about what would help another bald man made no sense – but what did I know? I was six. Daddy Willie was eighty-three that year, and rode a big tricycle around town, since my grandfather had finally stolen his car keys and his car, since Willie would’ve hot-wired it had he found it. (Some of us just don’t go gently “into that good night.”) That old fox died the next year, within a day of, and in the hospital room next to my great-grandmother, Miss Emily, whom he had loved and adored and hated and reviled and divorced and followed around for the rest of his life until death did them part.

I love how their wedding vows got them in the end.

We laughed all through the hymns at his funeral.

I could tell the story about my oldest sister, but my grandmother says it’s always dangerous to speak of evil aloud. I will say this though, if she were an animal, she would be a pit bull with a diamond collar, owned by a Barbie-clone with an SUV.

What do you mean I sound hostile again? Have you met my sister?

Some of the stories I know have been archived, like the one about the teacher who kept my mother after school and kept his hands crawling up her thighs while she completed some bogus assignments he had for her. Little kids are so defenseless and so easily shamed. I didn’t hear this story until I was older, and my mother awkwardly hacked out some syntax to ease the wall around her heart. The day my grandmother called to announce that he had died, had been cleaning his gun and shot off his testicles and bled to death, my mother …danced. My God-fearing, peace-loving, mild-mannered, plain-faced, hair tucked up in a sensible coronet of braids mother laughed and laughed and lifted up her hands and whacked her thighs and laughed some more, and then, and then — waltzed out and bought red shoes, leaving us kids blinking and a little afraid of her. She grew wings that day, and has since become a hawk, running her school, swooping down and pouncing with silent talons on those who would take away any child’s dignity. That’s a true story, there, if you count truth that stands tall in the shadow of camouflaging lies.

I know a story about my Aunt Tandy, whose twenty five year marriage is such a war zone that she’s like soldier back from combat – if you slam a door, she loses the last five minutes of her short term memory. It’s horrible to say it, but I can’t stand her. She’s spineless, toadying, even with me, even with us. I thought growing up meant that no one could tell me what to do anymore; no one could force me to do what they wanted. All Uncle Brian had to do was lift his fist, and she was his slave. What if that happens to me? What if I lose myself in this relationship, and then lose my mind? God help me, that woman scares me.

All right – all right. It is my own story that you want to hear, the tales that beat and surge in my own pulse. But it’s not my own stories that I can see. I know who I am – part hen, part hawk, part fox, part pit bull. We’re all the sum total of our families. My future is written in their lives just as surely as their faces in the mirror are reflected in mine.

But our time’s up? Already? Well. Thank you… No, I don’t think I’ll be here next week. No, no, there’s no need to reschedule. I think a little retail therapy might do me just as well. They’re having a sale on mirrors at Marshall Field’s… I keep thinking if I just can just find the perfect mirror, I will finally see myself…