There’s something about the end of a year that makes me think… about all manner of things. I know people who have made it habit and tradition to do a major clearing out – of clothing, of photographs and possessions, and I think it’s also useful to do a major clearing out of the mind. We always have two or three opportunities per year – there’s the Lunar New Year, there’s Rosh Hashanah, for some, there’s Shab-e-Barat, or National Day of Forgiveness, which seems as good a day as any to begin again… but as with many things, renewals and new beginnings first require distance.

The world is large, when its weary leagues two loving hearts divide;

But the world is small, when when your enemy is loose on the other side. 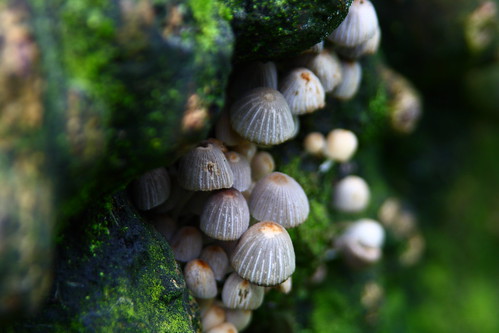 The mushrooms in the photo are so teensy-tiny that it took a high-powered lens to capture them… and you can’t really tell, can you? When we’ve stepped away from something, it’s sometimes easier to see – and other times, a lot harder. I’m intrigued by how such small things can be mistaken for something large. I’m pretty sure there’s some kind of object lesson in that, but… I’ll just leave you with the pretty picture instead of belaboring it, hm?