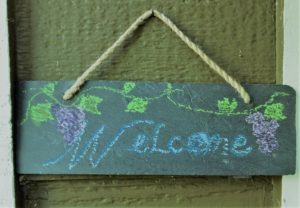 You know it’s beginning to look a lot like Autumn when you find a stray pile of coffee filters in the cabinet and your first thought is, “What can I use these for?” Yes, it’s true – while other people suffer from pumpkin spiced blight, my autumn ailment is the belief that I can surely go mano a mano with any crafty project that I see on the internet, or in stores, or on other people’s houses, and succeed beyond my wildest dreams. Never mind that they probably bought them, and the stores certainly did – I’m positive that I can do them myself – and make them look even better. (Now that I think of it, this may not be just an autumnal ailment…).

Today’s project was making a chalk sign on slate. Mind you, I only have fat sidewalk chalk and pastels – neither of which are ideal for real (READ: unpolished) Scottish slate – and mind you, I can’t really draw all that well. I made a WELCOME sign, and it looks… probably like you ought to stay away from my house.

Fine, whatever. It’s autumn in a few weeks, and there will be garlands of leaves and coffee filter wreaths and grapevines and scarecrows and I WILL BE READY.

I’m grateful I have something fun to focus on, because my scleromyositis is being a beast. My doctor has named it Predator. “You know that one part in the movie, where it just bursts out of that guy’s chest?” Well, not really, but I’ve seen the clips, and yeah – that’s what this disorder feels like – something which gnaws on my innards and erupts out of my chest periodically. Mostly, I’m dealing with it. Having something sucking down your energy and brainpower like an invisible leech is not fun, but it’s been …manageable. Mostly. Lately, though, it’s started affecting my digestion, which is difficult. When you’re a vegetarian, and eat a lot of fresh fruit and veg, being told you need to lower your fat, fresh, and fibrous intake or what’s in your gut will just sit there and rot because it can’t absorb into your system… is hard. I am… resentful. And cranky. And having to haul out a whole new way of eating that includes applesauce instead of apples and cooked instead of fresh. Soft foods are apparently the trick. At least the summer is ending; one doesn’t worry so much about lacking salads when it’s cold, and soup ought to be okay. I think. Ugh. At least yogurt and I don’t have to break up. And chocolate pudding. And chocolate mousse…

Really, whenever there is anything unpleasant going on, I take to the books. (Yes, in fact I have been reading like mad this past year. How did you know?) Now that I can read again – and there was a scary period a week ago when I was too tired even to comprehend while listening to an audio book (TOO TIRED!? How can that even happen?!) I’ve been enjoying Deanna Raybourne’s newest mystery series A CURIOUS BEGINNING. In children’s books, I’m enjoying Robin Stevens’ MURDER MOST UNLADYLIKE series — and I do order the British ones, because the titles and covers of the American ones give me a headache. (Murder Is Bad Manners?? Seriously, American publishers??) I’m looking forward to losing myself in more adventurous novels, including Rebecca Roanhorse’s TRAIL OF LIGHTNING, which is sitting on my nightstand, and Jacqueline Woodson’s two newest, THE DAY YOU BEGIN, and for older readers, HARBOR ME.

Because people so often ask how the writing is going, I’ll say… slowly. It’s new ground I’m breaking, trying to make a conscious decision to write something utterly new for me, something out of my usual family-oriented main character. It’s tougher still with Predator as a roommate in my brain who won’t conveniently go to sleep when I need a break. It’s tough, but to be a writer, I grit my teeth and remind myself that the gig means I have to write. Yesterday I finished a scene which had eluded me for a couple of days, and even though I had to lie down afterward, the feeling of triumph was real. Every letter counts, friends.

As hurricane season unspools, clouds hover on the horizon, I hope you are glorying in the final days of an unconventional summer, and wringing from them all the joy that you can.

One Reply to “{penultimate summer days}”