And remember when this annoying man decided that wasn’t necessary? *sigh* I’m going to repub this blog post from 2016 because I LOVE Harriet Tubman, and our chamber group is singing the song Harriet Tubman for our concert this month, and we should remind ourselves of who she was, so we remember who we could be.

“Come with me if you want to live!” 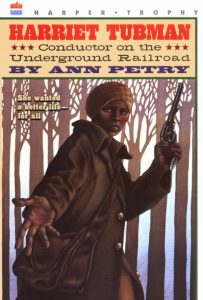 Doesn’t that seem like what that cover says? The gun, the hand reaching back. The utter seriousness on her face. It’s the quintessential Terminator-style scene — a savior arrives, guns blazing, demanding exact obedience in return for leading the underdog to safety, and then melting away into the sunset. Snatching victory from the jaws of defeat; it’s a story we’re practically demanded to love.

People who have looked at the paper money of other countries realize that American paper money loses points in the category of “interesting.” Not only does it hardly have any color but green, there are absolutely zero women on it of any shade. And now to discover that our first paper money woman (making sure to give Sacagawea her due) is to be African American, too? Wow. (Jury’s still out on how ridiculous it is that it won’t be for another twenty years, but xkcd said it best: C’mon, Treasury Dept.; this is a minor problem you could solve. Really.) 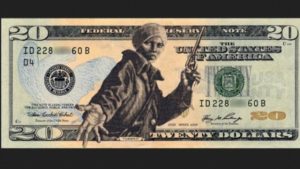 (Though I searched, I can’t give credit to the artist who put these two mediums together, but full props to them, and please let me know if you find them.) I was commenting that if the cover to the 2007 Ann Petry Harper Trophy book was made part of the design for our cash, we’d all hoard twenties, like the Sacagawea dollar coins got snapped up and mostly reside out of circulation. Tobias Bucknell tweeted back that he’d spend nothing but twenties. Which made me laugh. $.50 library fine? No, let me drop you a Tubman on that. No, no, a whole jar of change is fine. It’s fine…

Of course, not everyone is a fan of Harriet Tubman stepping out of history into contemporary life. People have been screeching that she was a METHODIST! (Oh, dear Lord, no! Not a religious person! We’re post-religious!), and that, additionally, she carried a pistol AND a sword. (ON HER PERSON! Whaaaaaaaat?) 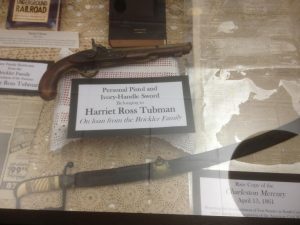 Oddly, you’d think fans of history would know that there’s a lot of tradition surrounding religion in America; especially back in 1860, after all, as the country had only recently descended from Puritans who left England for what? Religious reasons, and five points to you. Ms. Tubman’s owners had been Methodists, and it was what she knew. Surely we cannot fault her for that. Also: many abolitionists before or during the Civil War were not necessarily pacifists (John Brown or Nat Turner, anyone?) and though she was a humanitarian, Harriet Tubman was also the soldier who was famously quoted as telling slaves who thought after their initial escape that they’d made a mistake and should turn back, “You’ll live free or die a slave.” The gun she carried at times (she was drawn carrying a sharpshooter rifle on posters by irate slaveowners demanding her return) certainly gave that statement some weight. While I doubt she was unsympathetic to their fear, she couldn’t allow anyone to give away the position of the rest of those who were going to keep running. She carried a gun not just to avoid capture herself – she had a $40k price on her own head (well, Araminta Ross did, which was her name as a slave; she changed it to Harriet Tubman herself), which was a megabillions fortune in those days – but to make sure her little train on the underground railroad didn’t leave the tracks or lose a passenger. 1,000+ slaves and she never blew her cover, never lost an escapee. That is nothing short of miraculous, you know. A short, middle-aged woman (she was 38-44 during the Civil War years) who couldn’t read or write and who’d had a severe head injury during slavery, and she managed all of that.

Her heroism merely showed
A dame adept and of strong will
(Rethought her planning on the fly,
Refused to cower or stand still.)
Intuiting through trap and maze,
Eluding landmines laid for leagues
Tenacious, and her cunning ways

Transfixed her charges through fatigue.
Undaunted ’til their fear broke through –
By balking some made to return – “If
Manumission’s not for you?
A bullet will ease your concerns.”
Nursed and cooked, too; soldiered, spied: “hero” the word, exemplified.

So, she was many things: nurse, cook, soldier, spy — and veteran who drew a pension after the Civil War. Many, many people don’t know that. She wasn’t just some nice lady with a lamp showing freed slaves the way from shackles. She also demoralized the Confederates, blew up their mines on the Cobahee River, served as a raid commander under Colonel James Montgomery, in concert with the African-American 2nd South Carolina regiment — and she carried on as if her color and gender were beside the point. Many people know a bit more about this story from Comedy Central’s “Drunk History.” It’s a neat little reenactment, but if you’ve not seen it, be warned: drunk narrative with swearing:

Despite the wandering, this is quite accurate, which means this lady knows her history stone cold sober. So should should we all.

One Reply to “{remember when we thought we’d be throwing down a Tubman $20?}”