DNA-Ancestry research stories are kind of a fascination of mine – this girl just found out that her parent’s fertility doctor is actually her birth father; that guy just found out the cousin he always thought had interestingly different hair is no relation to him at all. DNA testing – at least for some people – is inherently tied up in narrative drama. I’m intrigued by the rush to aim saliva into a tube and the believe that DNA data reveals the secrets of the universe.

I attended school three grades behind one sister, and five behind the other, so we never attended the same institution at the same time. There was a brief overlap in college, but fortunately it didn’t end in any of us ever being in the same classroom. Because of the closely-knit community to which we belonged, I knew of my siblings’ friends, mostly from carpool and gossip, but I didn’t really know them. Nevertheless, we all of us had general knowledge of each other – and of a guy we’ll call Hobbes – a cheery, silly, floppy-haired blonde who was the son of one of the teachers who taught three of my siblings at one point or another. Hobbes was just part of the community scenery, as he was at least two years older than even my eldest sister, but when he was home from school, he popped in and out of view for many years at school functions, tagging along with his parents. 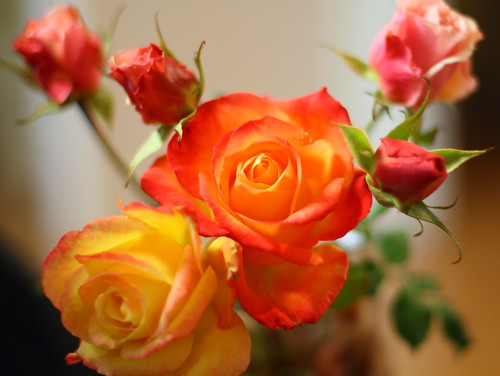 Within our community were also a family of sisters we’ll call the Roses. The Rose kids were almost the equal in number and age spread of the Davis kids, and both my older sisters had a Rose in their classes. Recently one of the Rose girls – apparently one of those helpful adults who does the family tree assignment WITH their kid – went on 23 & Me to do a thorough research of the, ah, Rose-tree.

She discovered that Hobbes is a Rose.

After the initial confusion and shock, she hesitantly made contact, found out that Hobbes was open to finding family, and that – shockingly, they were in the same city, and had always been. Last weekend, they met.

Imagine having grown up within the same religious(!) community as a half-sibling of yours, and having no knowledge of it at all, not even a suspicion enough to look at the shape of your nose and his and see how well they match. Imagine the adults who quietly… papered over an early indiscretion in their lives, and made all the gears work to keep churning out normalcy on a day to day basis. Both Hobbes and the Roses seemed to be happy enough as kids; how funny it must have been for them to compare notes, and figure out what it means to them now to know the secrets their parents kept; to laugh for what they’ve gained – and grieve for what they’ve lost…

As I said — inherently full of narrative drama. A story in each splash of spit.

at Halloween, he
the top-hatted magician
appears, and vanishes
a person in his pocket
we watch the whole show, wide-eyed.