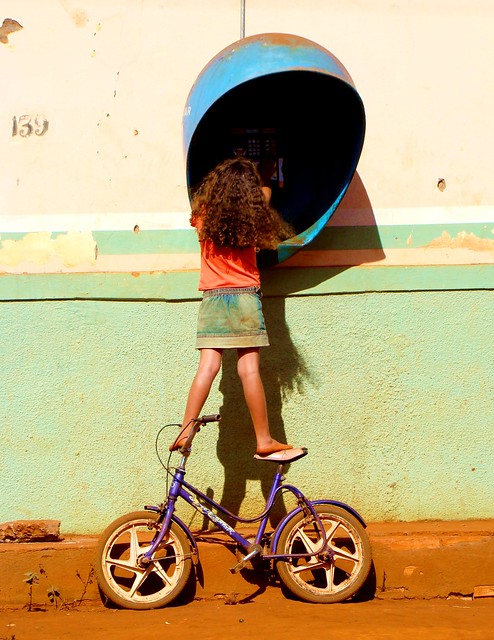 This month, I steered the challenge for the Poetry Sisters gathering, selecting a 2008 photograph taken in Porteirinha, Brazil by Flickr user Ana_Cota. The young lady – incidentally named Jessica – is balancing on her bike to reach a telephone, if you can’t see clearly beneath the weather hood. Pay phones are now nonexistent in many places, thus the picture’s title – bateu a saudade – feel the nostalgia!

Nostalgia was a good thematic jumping off place for me. The super-saturated color aspect makes the image look dated – Technicolor Kodachrome. The super-intensity of the brightness created disjointedness internally – and I felt like this needed blank verse, or another poetic form that wasn’t so formally bordered. I don’t know that I’m finished with what I came up with, but…

while you were out

static on a line
undefeated by dial tone
(can you hear me now?)
the ‘Busy’ signal stutters
The number you have reached has…

…disconnected, the past
is a foreign country. Still,
A man is not dead
while his name is still spoken
Gone, but always Going Home.

one thin dime’s distance
separates the here & now
we stretch, though time eludes our grasp
always calling back a world that is Going.

Once upon a time, the paint on this building was fresh, not flaking, the walk not caked with red dust. Once-upon-a-time Jessica, balanced on her bike, is likely in high school now, a this childish moment caught here and gone… like people, and things like public phones, childhood homes, and landmarks. Feel the nostalgia now?

“A man is not dead while his name is still spoken,” is a line from Sir Terry Pratchett, as is the phrase “always Going Home.” Both are from his book GOING POSTAL. Sir Terry passed away in March of 2015, and, as his books still carry his voice, including the last one, which I am still too sad to read, he will never be gone.

On a less melancholic note, don’t miss the ekphrastic poems of the rest of our crew. Laura – enjoying the quirk of Iceland on a well deserved holiday just now – pulls this off beautifully. Kelly went the Lewis Carroll route here. We mourn the loss of Superman’s changing room with Tricia, find a short and sweet poem about growingalso about standing tall from Sara, and Andi is waving from the sidelines this month.

Poetry Friday this week is hosted by Heidi Mordhorst’s Juicy Little Universe where the celebration for poet Billy Collins rolls on!