Okay, so it’s not actually a coupe.

My first Coke can of a Toyota was a sparkly sky blue, and had no shocks. Well, practically none. It was a stick shift. I was more than a little peeved when that car got T-boned. This is the second blue car I’ve had, and it’s kind of posh, actually. It has three cameras in it – one to make sure and record accidents, and the other two for backing up. It has two sets of wipers. I feel fancy riding in it. 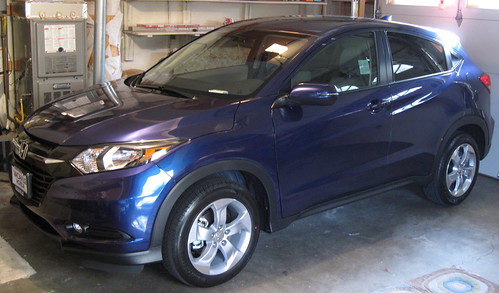 I didn’t want to actually care about cars, at all. When we lived in Scotland, we didn’t have a car for five whole years. In the life of an American, of a country of people seemingly obsessed with their vehicular independence, that seemed huge. We got used to it. We enjoyed it. I’m rather a fan of taking cabs, and wearing gloves so I don’t pick up germs on public transportation. Bonus: it gives you an excuse to wear a hat. Because, you’re already wearing gloves, right?

So, we came back to the States, and bought a car via Costco, which who knew you could do. Basically we picked out what we wanted, they locked in the price, we went to pick it up. There wasn’t the “thrill of the chase,” the annoyance of the hard sale – nothing. It was like grocery shopping with fewer choices. We didn’t want to care about brand or color or details, so that way worked perfectly. And, that car worked out perfectly, too – until it blew up three spark plugs and dropped a fuel injector and lost power going onto the freeway. Oh, and it drank six liters of oil for two months running. Tech Boy – whose fuse is fairly long until it’s not anymore – went to work one May morning in one car, and came home that evening in another. He’d had it and that was that.

I’m still peeved that we’d almost paid off the last car and it flippin’ broke before we were done with it, but this one seems like it’s going to last a bit. And it has four-wheel drive, even, so if I ever come into contact with snow again, I won’t freak out like I did with the other car. (Yes. California driver, horrified by a slight rime of frost on the road, that’s me.) I’m grateful for my fancy little ride, and that I can fit the nephews and the cousin and my sibs in there, all at once, if I wanted to. My sibs can take the bus, though.