There’s kind of a cliché about tween girls – between the ages of eleven and thirteen, that they somehow go horse-mad. I was not a horse girl. Not even a little bit. While everyone else was going nuts in middle school after the Saddle Club books, National Velvet, Black Beauty and others, I was yawning and buffing my nails. Which is ironic, since from sixteen to twenty-two, I worked at a summer camp, owned and wore out a pair of cowboy boots, shoveled poo, pitched hay, picked hooves, saddled and curried and swatted away horseflies. I actually sometimes worked with horses, and every summer was one of the hapless staff at my summer camp, chosen to ride the horses during Staff Week, after they’d happily been saddle-free all winter long. Yeah. It was a real joy, as they held their breath while their cinches were tightened, slapped us with their filthy tails, stepped on our feet, kicked, bucked, bit, and tried to rub us off against fences.

So, me: I wasn’t a horse-mad tween, ever. At least, I didn’t think so. But, a conversation this weekend with Tech Boy reminded me differently:

Tech Boy, (Driving by a field of Shetland ponies,): Hey, look. Short horses. What were the people on the Shetland isles thinking, breeding pit ponies? They don’t even have mines in the Shetland Isles.

Me: Well, no, but Shetland ponies were work horses on the island anyway, and they probably traded them inland to be used for breeding ponies who could go into mines and stuff. People bred them smaller. I think they were like those Justins.

Tech Boy: Those what now?

Me: The Justins. The ponies.

Me: You know… Justin. That guy. Who bred the horses to get a really strong workhorse.

Me: You know. Justin Morgan Had a Horse.

Tech Boy: You do know I have zero idea what you’re talking about, right?

Me: Oh, it was this book I read! On horse breeding! When I was … little. Okay, yeah, that sounds weird. 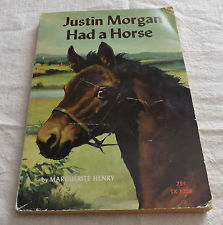 Nah, it’s not weird at all that as a seven-year old I was obsessed with a book on 19th century horse breeding, which was written in 1945. Not. Weird. At. All. I guess by the time middle school came along, I was, as they say, OVER IT.

The funny thing is, just even thinking about that one book makes me remember others. Anyone else recall BRIGHTY OF THE GRAND CANYON… a mule book, which probably started my whole fascination with the Tennessee Walking Mule (what, you didn’t know I had one?), or, MY FRIEND FLICKA, which I also read more than once? Amusing to note – FLICKA was written in 1941 and BRIGHTY in 1957. Clearly, as an elementary school student advanced reader, I had vintage taste. (Or else, our school library had really old books. Take your pick on that one.)