Today is Love Your Body Day, and I present: perspective. 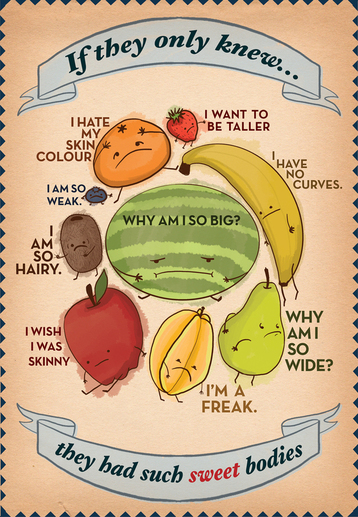 By artist Silvana Moran, for The Manitoban, 2012. Do not copy without crediting.

It’s been a good week for perspective in various areas of my life. I realized this week that being judgmental can ruin your writing.

There’s nothing like running up against your own internal prejudices than when you try to write something. There’s perhaps nothing worse than looking up to realize that you’ve allowed the silent prejudices of others to determine where your personal boundaries lie, and realizing that you have run scared and wedged yourself into a much tighter corner than you ever feared anyone else would push you. The worst thing of all is to realize that you no longer need the voice slapping you back into line; you’re shouting at yourself.

It’s like letting someone else decide what makes beautiful. It’s like giving up your own reflection in a mirror.

About six months ago, I started writing a character based on a true situation I observed during my undergrad days in college, but, as so many things in real life are, it was kind of too much to put on paper. Many writers have experienced this, that the real things that happened nobody would believe. My story was questionable, and so I didn’t ask those questions. So, in some crucial spots, I changed track, I rebuilt paths, I back-filled and patted over what was… and not surprisingly, I lost the road.

Authors should not be judged personally by what they write, but it’s what happens in contemporary fiction, and a lot of times, it’s why writers wimp out and don’t go the distance for their own work. Every single instance of book challenges or attempts at banning reinforces this sort of thing – people in a community deciding that “we don’t have room for your type,” you with your diversity and sexuality, you with your coarse language and your urban characters (Yes, I’m STILL smarting on Meg Medina’s behalf, and the phrase “urban characters” is going down in heavy black ink in history). Writers – working alone in a room in their heads – surface from time to time and just cringe at the who-will-save-the-children controversy swirling around their fellow authors and think, “I don’t want that to be me.” And we get scared, and don’t challenge ourselves, much less our communities, much less our readers.

I am never one to advocate rabble-rousing for the sake of spectacle, but there’s only really room in the crowded world of children’s books to write the true. If you’re not writing truth that’s at least crucial to you, you’re wasting your time. I’m not saying that your work has to be true to everyone, but if it’s not true to you, it won’t be true to anyone.

So. My character, whose Truth Is Stranger Than Fiction life made me back off and rethink? Well. I’m still Rethinking. This time, I have written on a little sticky note on my monitor, “The production of empathy requires that you make mistakes. Don’t judge, apply empathy.” And this time, I’m going to tell the true, and see where it takes me …