Earlier this year, when I decided to join Barb in ninja-assassinating darkness, I didn’t realize how you had to sort of have a script sometimes to do it.

That was because I hadn’t yet run into anyone else trying to ninja-assassinate darkness. When I did, it was sort of an abrupt ninja collision.

Picture it: Orange County, 2013. I leave the office of a swanky, high-end medical practice, jaw tight, ready for The Aftermath. It was stressful enough to see a strange, new doctor at the insistence of other relatives, stressful enough to be anywhere near L.A., which, far from being the abode of angels, is surely on the map by now as being a suburb of hell. (Hi, nice people from L.A. Have you driven in your city lately? Thank you.) The worst bit of the Stressful litany was going to be the little visit to the front desk, wherein the receptionist, in the special voice reserved for people extracting cash from strangers, was going to give me The Bill. It was going to be ugly. I was going to part with at least three hundred dollars, because this was a specialist, and I was uninsured, and I was amped up for the whole thing.

And then, the nurse told me I didn’t owe anything.

Do you think that I floated out of there, awash in gratitude? I did not.

I asked the receptionist, in tones of strained patience, for the bill. Three times. And each time she smiled and just shook her head. “You don’t owe anything,” she said. “No charge. No bill.” It was as if I didn’t understand English anymore. I asked. I switched the words around. Tech Boy asked. We stared at the receptionist. She looked at us. She smiled. We… left. 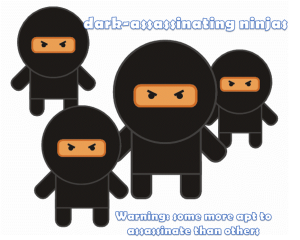 And, to my shame, I went into the bathroom down the hallway, checked under the stalls to make sure I was alone, then had a kick-the-wall, hiss obscenities, throw wadded paper towels meltdown. Oh, yes I did. What kind of poverty-level, beggarkin did I look like to that doctor? What kind of uninsured loser did I seem to be to him? How dare he put me down as a charity case when I DIDN’T ASK for his stupid help? How dare the relative who insisted that we see this doctor interfere in this way? What the hell was wrong with everyone? &Etc. It was not nice, I can assure you, and it would have gone on for much longer, except I had a plane to catch. I stomped out of the bathroom and ground my teeth all the way to the airport. I kid you not. I would have hated to sit next to me on that flight; I was a sweaty, seething ninja mess.

So, a change of scene: when I lived in Glasgow, one of the fairly awesome things – to me, anyway – was how many stores in the UK delivered. I could walk down the road in ankle-deep slush and go to the greengrocer in person, or…. I could get online, stay nice and warm in my wee flat, and receive my order from Sainsbury’s, right on my kitchen table. Now, I paid for this service, in my grocery totals, but face it: this is the UK, where homes are up at least one flight of stairs, if you’re lucky; my first flat was up one hundred-twenty stairs. And, the elevator often didn’t work. I felt that those poor people, who lugged my goods up to me, should get a little extra. I figured they could all use a drink of that disgusting Irn Bru or some tea or something, so I’d give them a couple of pounds for a tip.

And one day, a slim, hostile young man leaned forward and spat, “The fook’s this for, then?”

I was caught completely off guard, and it got worse. I won’t go into all the very boring detail of me trying to get him to accept a tip. I cried when he left, realizing that for him, I was so much less than he was that to take something from me must have meant something demeaning. I believe he thought that I was trying to – literally, as in Lords and Ladies – lord it over him. It was a cultural misstep the likes of falling short trying to step over the Grand Canyon. I still don’t quite know entirely how I went wrong. I only know it was awful.

Oh, let’s change the scene again: now we’re in Santa Barbara this past July, at a hole-in-the-wall Thai restaurant on State Street, with a forty-five minute wait for a table. Or, so they told us. They meant that it was that long a wait for couples; for our party, which was a merry group of three, we got a table within fifteen minutes. We were elated – starving! – but also a little horrified as we swanned past a couple who had been ahead of us, patiently waiting, very obviously out on a early-in-the-relationship date. It seemed, Tech Boy told me later, like the perfect Random Act to ask for their bill. After all, we’d saved up for our SB trip, and splitting all our costs three ways meant things were cheaper than we expected (in Santa Barbara, trust me, that is a feat). Ourselves and our friend were having a great night, the food was fabulous, and while Tech Boy is a trickster, a joker, and an all-round tech nerd, he is also an Extremely Kind Person, and he wanted to share the joy. Only, the waitress couldn’t get on board. “But, why do you want to pay for them? Because. We can’t combine your bill… We’re not asking you to. We don’t know how much the total will be. Just give us the bill when they’re done. And on, and on. Meanwhile, we linger over our meal, and I happened to see the waitress approach their table, hand them their bill… and then point across the room at us. I only vaguely wondered, as you do, what she was talking about, then, suddenly, the guy stands, and heads to our table, the tips of his ears crimson. We look up and smile. “Um… can I buy you a drink?” he blurts at Tech Boy.

Mind you, Tech Boy was the only one at the table who knew what was going on. His entire face goes red. “Um, no – that’s okay. Just… have a nice night.”

“But… you paid our whole bill. I have to get you something.”

And, back and forth and back and forth, and everyone’s embarrassed and edgy, and I wanted to give the waitress a hard smack for contributing to the confusion. Poor Tech Boy. The point of a random act of kindness is that no one is supposed to know. Who doesn’t know that??? 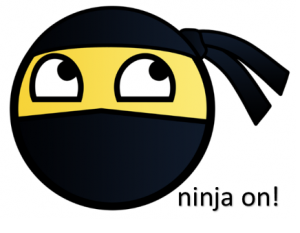 I’m reminded of these awkward moments of hideous embarrassment and vast misunderstanding because Bex, from Livin’ La Vida Cray Cray blogged how an act of kindness from a couple of strangers made a huge difference in her life this weekend. I share these moments of discomfort with you, to remind everyone who, through the long months of this year, and the piles of disappointments and struggles we’ve all faced, might have forgotten our goal of bringing light to our communities. It’s not too late to become one of those crazy angels.

Just… don’t forget to have a plan. Take some precautions. Have a script.

Sometimes everything in our lives becomes All About Us. If we’re offered a kindness, we can get all bent and overwhelmed with panic and anxiety because SOMEONE HAS NOTICED OUR MESS, and finding that we’ve been offered help can be met with jaw-dropping hostility and/or bathroom meltdowns. Have a script. Have a little story to tell. If I’d thought in terms of Lords and Ladies and that Boxing Day is when the Laird gives his tenants a little something like a tip (and, in the past, old clothes), I might have just gotten a Coke (sorry, no Irn Bru) out of the fridge and said, “Here’s something for the trip down, thanks,” instead of handing out cash like he was a wee peasant. Next time, Tech Boy will remember to say something like, “Pay it forward.” Trite, but it would have given structure to the moment, and would have helped the guy feel that he could go back to his date without feeling obligated. (Also, it might have helped his waitress, but who knows, there.) If the receptionist at the doctor’s office would have said, “You’ve won Dr. A’s new patient lottery today – your consultation was free,” it would have only been a partial truth – he does, apparently, do that, for his own darkness-assassinating ninja-ness. Had someone said this, maybe it would have helped me feel less exposed and ridiculous and poor. (Or, maybe I have issues and nothing would have helped. Tough to call.) Anyway. There’s no diminishing the importance of narrative – in defusing doubt, in providing background, and in facilitating connection. It’s fab to do random acts of kindness. It’s a lovely and genuine thing, and I truly believe that it elevates our minds through our endorphins and by just making a more positive environment for everyone. Just remember to be prepared to use words to link us, too.

As always, I look forward to your ninja stories.