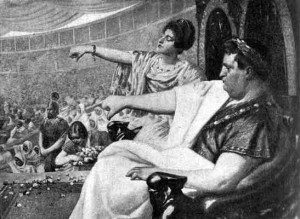 – no, wait. You’re not at all dear. You’re an annoyance that keeps on giving. But, I digress.

How I loathe the fact that even sans television, I cannot escape you.

Thank you to everyone who forwarded the clip of Jonathan Antoine and his almost nameless female partner (she has a name, Charlotte Jaconelli, but people are choosing to ignore it, and mostly ignore her), every blog that posted it, ever news outlet which regurgitated the story over and over and over again: “OMG, big people can, like, do things! Squee!” Granted, that wasn’t the reason some of you sent it. Admittedly, it is with a warm feeling of frank admiration that people are passing this on – the image of a sweet-faced kid who would rather shrug than answer questions, whose hands shake as they grip the mic, whose hair reminds us of Weird Al’s before age and hair products thinned it from its former springy glory. When he opens his mouth, none of those things matter; he sounds like a youthful Pavarotti. Viewers are entranced, charmed, humbled, tearful.

Dear Reality TV: how is it that you are still enamored with this?

What, because the kid’s overweight, he couldn’t possibly have a good voice? Because that evil numpty, Simon Cowell expresses doubt and dismay aloud – “Just when you think it couldn’t get any worse,” – we’re meant to have silently agreed? It amazes me how you can just keep trotting this storyline over and over again. It’s manipulative and weird and troubling, and …people eat it up. I just keep thinking, “Really? Does anyone still think that just because you’re heavy, or older-middle-aged, or dressed in less-than-stylish clothing, or not perfect looking, or not mainstream conventional somehow, therefore you can’t _____ ” Sing, dance, walk and chew gum, whatever? I mean, seriously, Reality Shows?

Were I being generous, I would say that these talent shows are like the cattle calls they have for Broadway and stuff – you go, you audition, you take your chances. But I am not generous, I am blunt. The set up on this show — the build up to the kid going on stage in this disheveled rock star T-shirt – when he’s performed on Youtube in suits – the obvious sneers from the judges, the camera panning picks up anxious, doubtful, twisted faces in the crowd… to GLORY! And AMAZEMENT! And WONDER! And he’s AWESOME! The crowd finds its feet and ROARS!

Doesn’t ANYONE else feel just the tiniest bit… manipulated?

Reality Show Allegedly Praising Talent, YOU ARE NOT ABOUT TALENT, YOU ARE ABOUT SPECTACLE. You are all about the freakshow, the circus, the shallow, quickly passing distraction. You value success, but only for a given value of said. “Hey, look, we found Loser A, B, and C here. You want to stare at them. You want to be mesmerized by their very freakishness. Look! Stare! Listen to Cyanide Cowell say what you hadn’t thought of saying, but now pretend you had! And then, INSERT DRAMATIC TWIST HERE: Watch How We Turn Your Opinion Around!!! It’s the familiar trope of sow’s ear into silk purse, the diamond in the coal bin, the rags-to-riches, prince-from-pauper. It’s JUST SHOCKING that someone not conventional looking COULD HAVE THE LEAST LITTLE BIT OF TALENT, WORTH, OR SUCCESS. Please, quick – let’s shout it from the heavens, and put it alllll over Teh Internets!

Same old story, the least nourishing fodder ever, and still everyone opens wide and gulps it down — a little teary, sobbing that now they have proof that dreams do come true.

I realize I sound like a cynical witchling. Listen, though. I have nothing against Jon Antoine. I have nothing against people who audition for things. I have nothing against dreams. I have something major against lies and manipulation. I just hate the idea that at some point this will cease to entertain the Capitol, and you’ll drag another poorly armed District pledge into the arena and break out the cornucopia. This guy braves the freak show to get a quick celebrity boost, and then — ? And God help him if he’s at all emotionally fragile or truly shy — think about it. Where is Susan Boyle? Still recording? Now that she’s more together-looking no longer interesting to the cameras? How long does Jonathan Antoine have? The clock on his fifteen minutes of fame is tick-tick-ticking – what lengths will he go to to stay on the stage? How many other people will he mow down? How long will you keep looking?

With no love for you, and a deep desire that you would just die and burn to ashes,