I love having smart friends. One of my newest is Dr. Lee McClain, author and professor at Seton Hill University in Pennsylvania. She invited me to address her MFA class yesterday – which was a privilege and an honor for me.

They were fun. They were hilarious. They were brilliant and did not mind my use of the nonword “geekitude.” They also got that I named Octavia in Mare’s War after author, Octavia Butler, of blessed memory. How much do I love people who figure out my silent tributes?

It was lovely, but Lee’s class was an evening class in Pennsylvania… which meant it was a verrrry earrrrrrly morning class for me at Greenwich Mean – along the lines of 2 a.m…

…which means I am sitting here… staring. Everything is a moving picture or a dream, a thought that is at the edge of my consciousness, not coming through. I am waiting for my brain to catch up with my fingers… and it’s not happening.

So, let’s look at pretty pictures instead of writing right now, shall we? 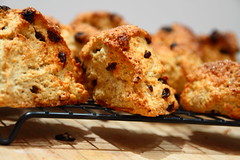 Been baking a bit lately. Apparently these scones were “gorgeous,” which is high praise from a Scot. Did you know that scones aren’t English at all, but Scottish and Irish? I had no idea. 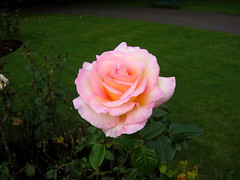 Last night we had our first hard frost, and I suspect this rose is no longer this lovely, but day before yesterday, it was gorgeous. In the little classroom garden by the Gaelic school, sunflowers and red poppies are still growing. Sunflowers. In Glasgow. I salute those kids’ faith that the sun will come out… eventually. Maybe they grew them as a science experiment? Hypothesis: Sunflowers will actually grow without the presence of sun…

Most of you by now know that the Vatican has determined, for reasons best left to television producers and lots of watching Simpson’s reruns, that Bart Simpson is a Catholic. 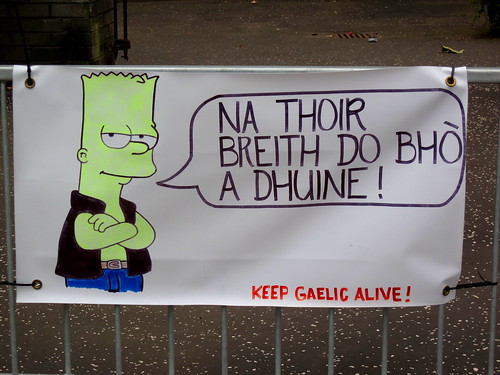 Glasgow’s done him one better. Glasgow declares that he speaks Gaelic. From my non-existent grasp of Scots Gaelic, I believe this says the ubiquitous, “Don’t have a cow, man.” 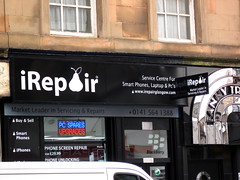 This city is FULL OF BAD PUNS. Of course, that shop is next door to a pub called Fanny Trollope’s. Which isn’t a pun, but which sounds as if it’s the punch line in a ribald joke.

I am still often laughed at by cab drivers. They make remarks about me living here, rather than in “sunny California,” and I shrug. Yes. It rains here. A lot. When it isn’t freezing or sleeting or foggy. Sometimes it does all four at once, which means It Is Bad. But usually, it’s just a bit of rain, which is doable. Rain occasionally makes things unbeautiful — squalor shows itself to be yet more squalid when it is wet and squicky — but you can never truly be surrounded by ugliness when there are trees changing colors, bizarrely bright dye jobs, steampunk inspired outerwear, and train stations. 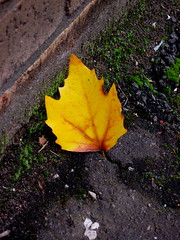 Below is Glasgow’s Central Station. I love its sort of Art Deco light fixtures and just the overall airiness of the place. Victoria Station in London reminded me of this place, only Glasgow is even brighter. I look up every time I go there to catch a train – and count the birds which swoop in and make themselves at home there. People watching at the train station(s) is one of my favorite things — unless I’m having to run for a platform. Then I am just annoyed and trying not to run anyone over. 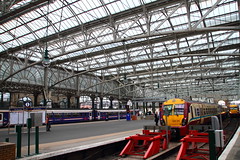 Even when I’m so tired my eyes are burning, there’s much to like in the world, including this post at Chasing Ray’s What A Girl Wants series, contributed to by a number of female authors on what made them want to scream during their teen years. Powerlessness and being ignored. Being overlooked, having secrets kept from us. Having our bodies out of control and used against us — these were a few of our least favorite things. And we raged.And we grew. And we survived. All hail the riot grrlz.. Never let rage destroy you. 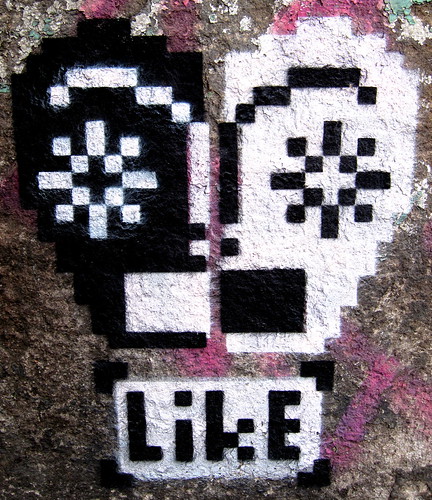 And here’s to you, moving through your days, seeking your goals and pushing past weariness to get things done. And also, here’s to taking naps when needed.