First, let’s take a moment to scream, “AAARGH! WHAT HAPPENED TO SEPTEMBER!?” quietly into a pillow. *Ahem*

You’re invited to our challenge in the month of October! Here’s the scoop: We’re taking advantage of the rich bounty of the Poetry Friday Universe and writing ____is A Word Poems, wordplay invented by poet Nikki Grimes and shared by Michelle Barnes. Once you’ve read a few examples, you’ll get the hang of it. Have a word in mind? Good! You’ve got a month to craft your creation(s), then share your offering on October 29th in a post and/or on social media with the tag #PoetryPals.

Seriously, poets: wither September? I’m not exactly averse to the conclusion of this ENDLESS season of chaos and smoke, but goodness, does it seem as if it was August five minutes ago! The month has brought challenges and changes for many and a louder pitch to the usual machines of industry churning around us, producing media and news and drama and nonsense. I’m now happy to welcome the rain (please, please, PLEASE) and the gloriously bright, crunchy (not engulfed in flames) leaves; the long seasons of rest before renewal… Somehow, it seems it has been such a manic summer and I am so pathetically eager for autumn that I will even put up with cinnamon, nutmeg, cloves, allspice and ginger being added to a hard orange squash and then that flavoring being slopped indiscriminately on pretty much everything, without too much complaint. (I never said NO complaint, though, so don’t @me with those lattes…)

With my love of this season of change, it’s not much of a surprise where I ended up with our challenge this month. Tasked to choose material from poets within the Poetry Friday Universe and write a tanka in response or in conversation with the poem of our choice I found myself choosing instead of a single poem, an entire project – the Poetry Sisters autumn hymn poems from 2017. Hymn meter is repetitive and simple, and autumn is pretty straightforward. Those two things together allowed us to really polish a single thought. Now, a tanka is meant to evoke a mood or an event, so the process here is wholly different. After a quick read I discovered that most of us chose to imbue seasons with a female energy female:

With this trove of imaginative imagery (though admittedly, with less time than I wanted this week), I came up with a nod to Liz’s poem that incorporated everyone:

Nobody expects the season decline before the sleep of winter to go quietly, do they? Lady Libra is stepping over her sister’s cloak, borrowing a dress, shoving some blossoms in her hair, and coming in reallllly late – or is it early? – with gold-smeared cheeks…

This one is in conversation with “If Apples Were Dappled And Sweet,” Sara’s ode to endings and the violence of the harvest before the decline of winter, which just didn’t really blend as easily ideologically. It jarred me when I first read it, but in a true way, resonating with the abruptness of the end of bee-loud glades and dappled shade that makes a summer… To everything there is a season and a time, and today it’s time to bring in the apples and wrench the honey from the hive, and it’s gonna get messy, there will be a lot of rage (largely from the bees) and it might get loud. Leave off the idea of bringing in the sheaves with some light rejoicing – even vegetarians end up slaughtering the peace a bit to bring in the harvest:

this, how it begins:
goodbye. redden, crumble, dry
swift twist, snap, an End
as daylight bleeds from the fields,
harvest is waged ’til it yields

Poetry Friday is hosted today Poetry Sister Laura, whose round-up is right here. You can check out Sara’s poem here, and Cousin Mary Lee’s is here, and you’ll find Tricia’s here. Andi‘s poem and Kelly’s poem is here. Michelle’s tanka is here; Linda B’s is here. Carol’s autumn offerings are here, and Irene’s poem is here. Even more Poetry Peeps might pop in throughout the day, so stay tuned for a round-up of links.

I’m flat exhausted right now, but the last week, we had the first nights in the low fifties, and they were exquisite. Summer is dragging her skirts, kicking up the last fuss, but remember, perhaps soon – this too shall pass. Paz, mis poetas.

You’re invited to try our challenge in the month of September! We’re writing tanka in response to a poem we love from the Poetry Friday universe. Choose to respond to an original poem of any sort, from anyone who participates in Poetry Fridays – give us a link to the original poem, then go tanka-trading away, and make something tanka-true and new. Are you thinking of a poem you love? Good! There’s still time to play with your 5-7-5 creation(s), then share your offering with the rest of us on September 24th in a post and/or on social media with the tag #PoetryPals. 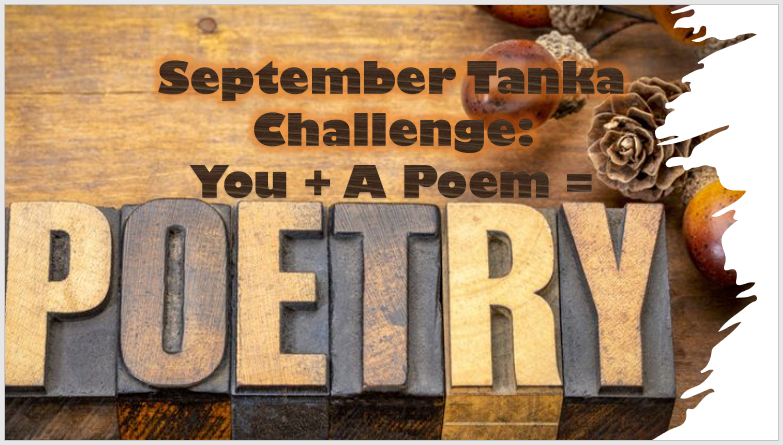