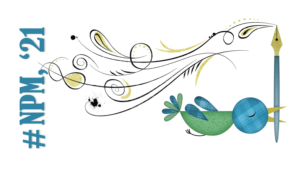 On April 1, Tabatha announced her intention to celebrate short poetry in translation this month. She, as I did, took the pandemic as a little poke in the bum to dive deeper into language. While she chose Scottish Gaelic and French, I finally decided to seriously study Spanish, as I live in a state which boasts that as its first language. I also chose Dutch, since *ik hou van mijn Nederlandse vrienden, and their quirky, unique land and culture. Now, these language combos might sound a little hinkey, but when you’re in it, at least for me, tandem language studies are sometimes helpful. •Mi español ayuda a mi holandés, y vice versa. (Sometimes. Other days it seems I’m equally stupid all languages, as the w sounds like v or sometimes f and the ch/g-sounds-like-guttural h of Dutch invades my rolled r, ñ-laden, b-sounds-like-v Spanish. It gets wild.) I’m nearly to having studied one language or another for nine hundred contiguous days, though, so I’m hopeful, at least, that routinely cudgeling my little gray cells into greater activity is doing something for me.

In Dutch, twalig means bilingual. No handy mnemonic, but I remember it by thinking of twa (the Glaswegian Scots word for two – I know, don’t @ me, I *did* live in/near Glasgow for five years! You could also use twee for two in Dutch) and taal (the Dutch word for language). I love how Dutch builds on itself, such that the compound taalkundige is literally language + skilled. Language skilled. Linguist. Something in that – and in the number of idioms relating to the tongue – speaks to me.

Poetry Friday is ably hosted today by Tabatha Yeatts-Lonske at The Opposite of Indifference. Tapadh leibh, Tabatha!

As always, there’s poetry all around – don’t miss thing, including: Robyn Hood Black’s Friday explorations of Issa’s haiku in translation – a beautiful project. ♣ Did you know The Global Vaccine Poem project, a collaboration between the University of Arizona Poetry Center and Wick Poetry Center at Kent State University, is inviting EVERYONE to share their voices and promote COVID-19 vaccination? We’ll be adding a stanza to a poem by The Naomi (Shihab Nye)! How cool is that??? ♣ Less cool is Linguicism – or linguistic bias and discrimination, which spills over into the workplace – and into the classroom. ♣ This piece from Kevin Simmonds in Poetry Magazine focuses charmingly on how our voices and words shapeshift and morph to mark or obscure identity – and how both music and voice inhabit poetry. Some good stuff.

*I love my Dutch friends. Language. I have to use my head!* • My Spanish helps my Dutch. Language! Leave me to myself.•