Last weekend, I took a train ride down to the coast to see a friend. On the way there, I practically pressed my nose to the window, taking in the sun on the hills, watching the sea. 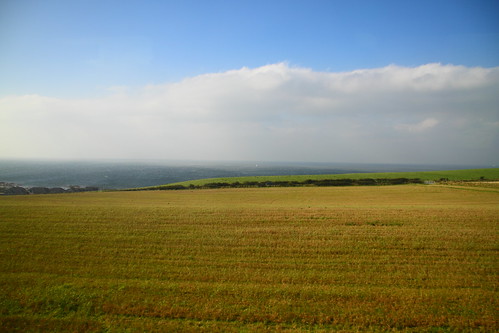 I must go down to the seas again, to the lonely sea and the sky,
And all I ask is a tall ship and a star to steer her by…
…And all I ask is a windy day with the white clouds flying,
And the flung spray and the blown spume, and the sea-gulls crying.

Oddly enough, there’s not much fall color here, not yet. The tops of the trees are yellowy gold, but down below, there’s still green, green, green. We’ve had our first frost, but it hasn’t changed much; since it rained all summer and on into autumn, true cold hasn’t had too much of a chance to take hold yet. But, it’s getting there.

This is the time of year it’s always hard to be away from home. I miss what autumn looks like. Though it’s probably been on overkill since the third week in September – or earlier – I imagine there are autumnal displays: pumpkins, mums, scarecrows, bales of hay; the inevitable stupid skeletons or tissue paper ghosts. Fortunately, there’s no Halloween here – it’s an American holiday. (No: I don’t like Halloween. Yes: I love dressing up. No: I hate doing it when a.] I’m supposed to b.] when everyone else does c.] with such uninspired, generic outfits. Let’s just all wear steampunk on the fourth Tuesday of every month and our Victorian bustles every Wednesday. But not because Hallmark tells us to.) Unfortunately, there’s no Thanksgiving, either – also because of that American-holiday thing. 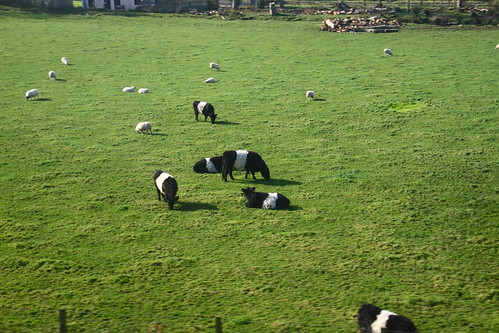 I’m grumpy about that because this is the third year I will have had to suffer through my life without Tootsie Rolls, but I think I’ll survive. My teeth probably thank me. I only eat about one of them a year, but the fact that they don’t have them in Scotland, and it’s a Halloween candy immediately makes me think I need some. That, and candy corn. Insane, no? Two overly sweet, disgusting candies that people otherwise don’t bother eating, but I have insane cravings for them this time of year, just like I jones for candy canes in December – also not something they eat here. Strange, strange world – separated by a common love for sugar, and a complete inability to stock what I want in the store. Le sigh.

There’s happy writing news: One, on Tuesday my agent got my latest manuscript. And for all you nice people who were so encouraging: it’s the science fiction book! I had to finish it BEFORE I started my Cybils reading, so I wouldn’t be unduly influenced, but it’s done, and it’s out of the house, and boy I am relieved.

It finally happened! My friend Ethel is having a book! (That’s kind of like she’s having a baby, only I already met her when her youngest was a a newborn. That kid’s in school already. Sheesh, grad school is disappearing in my life’s rearview mirror.) Her very first book – CUT THROUGH THE BONE — is a book she suffered through writing when I was suffering through writing mine last winter, so I kind of feel an even deeper kinship through her whole process. I’m a bit jealous that HERS is coming out a full year in advance of mine, but WHATEV, you know? (That’s the difference between short stories and novels – short stories seem to have more immediacy.) It sounds like it’s going to be all kinds of intensely beautiful and heart-wrenching and affecting and wonderful.

Cut Through The Bone (Trailer) from Dark Sky Books on Vimeo.

In this stripped-raw debut collection, Ethel Rohan’s thirty stories swell with broken, incomplete people yearning to be whole. Through tight language and searing scenarios, Rohan brings to life a plethora of characters — exposed, vulnerable souls who are achingly human.

She got jacket copy from one of the artists in residence at our school during our grad program. I am thoroughly impressed.

I’ll never forget meeting Ethel – I saw her as this sweet-faced, quiet Irish girl with a lilting voice — who wrote the most shocking, hilarious, impossible stories. Somehow I expected her writing to be serene and quiet and attractive — like she is. And sometimes they were. But sometimes her stories were bruised, gritty, dirty, bloody, and tear-stained. And real. So, so, real.

Ethel’s voice gives me courage. Read her book, okay? You might take courage, too. 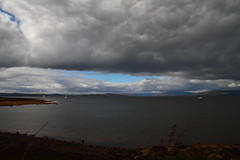