Black Gate is currently seeking submissions of heroic fantasy. Clarkesworld Magazine, which is also accepting queries for non-fiction and ART *coughs* will publish anything within the SFF/horror genre, but they have a loooong list of what they call “a hard sell.” I’m still snickering over the fact that stories about talking cats AND talking swords are not on their list. Darn.

Check out the IdentityTheory — a neat title if you like philosophy.

Cricket Online Review dropped me an email the other day. I’d never heard of them, but they’re reading for their next literary ‘zine, and have this to say about who they are: 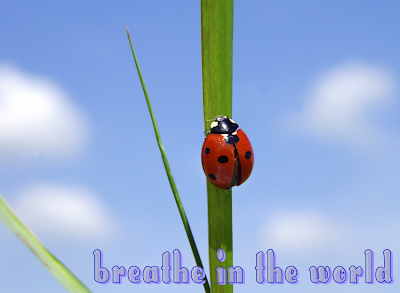 Most of us have learned to disagree strenuously with the phrase “write what you know.”

Maybe the new advice is “know something before you write.”

After all, aren’t the best books the ones which have details of other worlds than we know? Worlds where we are percussionists, unwillingly follow the renaissance fair every summer with our parents, live on the outskirts of a reservation in Minnesota, or run away from home to find our fathers in Ireland — those are worlds we don’t inhabit, and stories which catch at our imaginations. Why should we want to linger in worlds as common and as familiar as our last names?
Breathe in the world.
Breathe IN the world.
BREATHE in the world.

“I have been known to tell my writing students: If you are going to stand on the shoulders of giants (as we all do), read what they have read, not just what they have written. Take a course in bird identification, on the proper way to set in a sleeve, how to roast an ox, how to weed a garden. Read a book on shoing horses or stand by someone doing it. Smell the air. Name the clouds. Learn how to read the stars. Taste a clementine with your eyes closed. Go through your house eyes shut and touch as many surfaces as you can. See what grows in the cracks of a city street. Dive into the ocean. Ski down a mountain. Sit on a rock and watch without moving all that moves about you. Breathe in the world.”

…the question must be asked: what’s the point of ethnic based awards anymore, anyway? Are we ready to move away from that?

Esme just would like to be considered for the Coretta Scott King Award, please and thank you.

What’s the purpose of these awards? Have you ever read the criterion for the Coretta Scott King award? Is that criterion filled only in books written by African Americans?

Boy, I can well imagine that this is going to tick some people RIGHT off — the idea that a Caucasian lady has the gall to question whether or not the King Award group should rethink the parameters of the award, and maybe open it up to non-African American authors — but it’s an interesting question, one which deserves thought instead of knee-jerk rageaholic reaction.

I don’t have an answer for it, to be honest.

But the thoughts, they are provoked!

Kadir Nelson, for that blindingly spectacular book, We Are the Ship did not receive the Caldecott?

But seriously? No Caldecott?

Once again I really wonder if they work out these awards in tandem, as in “oh, he’s already got one of those. Give it to someone else.”

Kadir Nelson, for that blindingly spectacular book, We Are the Ship did not receive the Caldecott?

But seriously? No Caldecott?

Once again I really wonder if they work out these awards in tandem, as in “oh, he’s already got one of those. Give it to someone else.”

Welcome to The Year of the Ox!

I still maintain that having two New Year celebrations is the best idea, ever. All of the resolutions that you’ve already blown through twenty five days ago are over — so, you can start over while munching on a banh tet trung thu or mooncake, and decide that the Lunar New Year might work better for you!

The perfect book for this two-week celebration of the Year of the Ox is Kao Kalia Yang’s The Late Homecomer. Conveying both the horror and the sweetness of a life lived in the midst of war, yet protected by a loving family, Kalia is a voice for the Hmong, a tribal people who lived peacefully in villages in Laos, until the CIA and The Secret War destroyed that way of life. 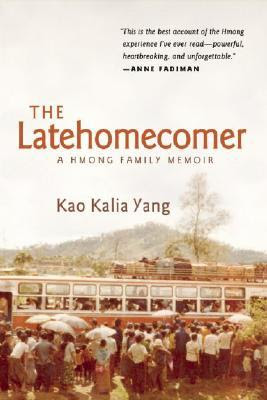 Kalia’s memoir details the story of her family’s escape from Laos to the refugee camp in Thailand, where she was born in 1980, to their immigration to St. Paul, Minnesota, when Kalia was about six. She talks about the grandmother who kept alive the traditions and the customs of the Hmong people, many of which were lost, as separate groups of Hmong were thrown together in the refugee camps, and re-educated in American ways. More than just the story of the Yang family or of the Hmong, this is the story of Kalia’s grandmother, who named her, enchanted her, educated and loved her, and represented to Kalia the bedrock of everything she had ever known. In 2003 when she died, Kalia realized that her grandmother’s life and the life of the Hmong was something everyone should know about, and she wrote it all down.

Kalia is a young writer whose engaging, clear narrative makes her family’s history, and our shared Hmong and American history poignant. Her family’s struggles and victories become our own, and young people looking for a book on a portion of American history they might not have read before will be able to devour this very readable book in a single afternoon.

Since we don’t review non-fiction, at our book site, I sneaked this satisfying memoir in under Non-Fiction Monday status, and in honor of my little sister, whose birth people are Hmong. Happy Tet.

Buy The Late Homecomer from an independent bookstore near you!
All content (unless otherwise attributed) is © Copyright Tanita S. Davis and may not be reproduced in any form.

TIME IS RUNNING OUT! This is your last reminder as the days tick down: mental_floss is giving away five $10,000 scholarships for college. Enter to win by saying, in 750 words or less, why you should win your tuition. YOUR DEADLINE IS JANUARY 31st, so DON’T DELAY!

I’m not sure if this is good news or not — but news it is. Alloy Entertainment, the book packaging company that came up with the idea for The Sisterhood of the Traveling Pants and the Gossip Girls series is now accepting …YA manuscripts. Generally, all of their ideas come from in-house sources, but now they’re looking for fresh ideas… possibly those not centering on a.) a group of girls b.) who are all having romances, journeys, and dramas. Good luck, writers. It’s the 250th Birthday of Robert Burns this weekend! dress up your Burns dolly and read a poem of his! Then eat some …sausages, if you can’t stomach the idea of haggis, and raise a glass for THE most famous Scottish poet, whose humble beginnings, various carryings-on with women other than his wife, and razor-tongued political commentary still managed to leave him Scotland’s favorite son all these years later.
All content (unless otherwise attributed) is © Copyright Tanita S. Davis and may not be reproduced in any form. 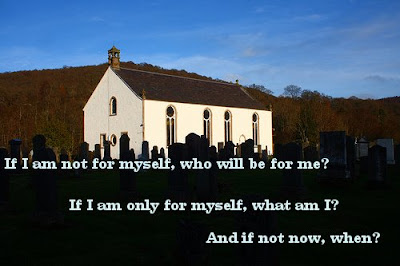 Earlier this week, the words of Rabbi Hillel echoed through my head, as the change of administration in the country took place. “We understand,” the gentleman said, “that greatness is never a given.”

Nothing is a given, and never has been. No one is handing out greatness or goodness or change or hope. Everything has to be… taken, hands opened, accepted, reached for, grasped, and achieved.

Perhaps a strange thing, to place the words of an ancient Jerusalem scholar on the side of a whitewashed Presbyterian church. But I think the wisdom of Rabbi Hillel is transcendent enough to work, and the imagery of a plain and practical church, with its churchyard full of the past, speaks to the generations behind and before us who knew:

Nothing is a given.
What a world, in which we have a chance to make something of ourselves…

Poetry Friday is at Laura’s place. And don’t miss her fabulous picture of the dungeon at Urquhart Castle, and the “15 Words or More” poems which came from that prompt. Some pretty intense observations. 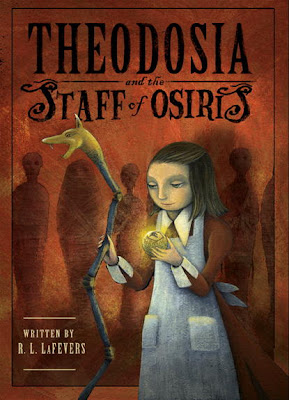 Theodosia is sitting on the windowsill, waiting for me…

To finish my novel.

Some of us bribe ourselves with chocolate.
Some of us need shoes.

But an author must always bribe herself with books.

Head down and back to work…

(Psst. If you missed our great interview with author R.L. LaFevers, revisit the SBBT here! 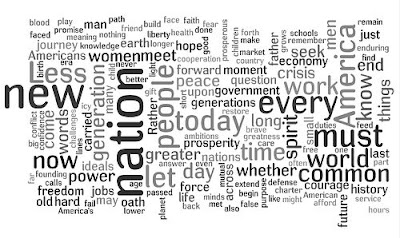 This is the text of the inaugural speech of our 44th president as created by Flickr User Emily Chang, who is selling this image on pins and mugs via Zazzle. Or, make your own at Wordle.

The 44 Words Project, which combined a photograph and forty-four words about our forty-fourth president, rolls on at peapods. Can you limit yourself to that few of words?

My father tells a story… of two buses pulling up to a stop sign, the windows going down, spit, rocks, and rotten fruit flying. The combatants from each bus were primed for this, well armed for this morning-by-morning war that pitted the Caucasian kids against the African Americans.

The buses carried kids to new schools… to be integrated.

Integration… wasn’t that the dream? But it was a thirty-second nightmare every morning for those kids, the resumption of a war their parents’ started, that they felt called on to finish.

And does not the war go on?

I don’t believe in miracles — no, that’s wrong. I do believe. But not in miracles involving people, maybe. I’d sooner believe that large bodies of water could part, to allow us to walk on dry ground. People can change, but they rarely do. People can do the right thing, but it’s not within us to do that naturally, for sure. It makes me wince to hear people referring to the new president as if he’s Jesus Christ’s baby brother, and will walk on water, raise the dead, and possibly fly everyone a cup of coffee to boot. The fervor of the crowds makes me… terrified. Raising someone so high can only cause them to fall. He’s not God! He’s only human! He’s not Irish, OR Scottish (which is the newest thing — yeah, he’s going to rush out to the Burns Night dinners in Edinburgh this week, didn’t you know?)or anything but what he is — which is one individual man.

Like all of us, I’ve seen people building bridges out of hope and optimism. I’m a believer in God. I’m willing to believe in miracles.

I’m willing to be convinced.

“For as much as government can do and must do, it is ultimately the faith and determination of the American people upon which this nation relies. It is the kindness to take in a stranger when the levees break, the selflessness of workers who would rather cut their hours than see a friend lose their job which sees us through our darkest hours. It is the firefighter’s courage to storm a stairway filled with smoke, but also a parent’s willingness to nurture a child, that finally decides our fate.”
-President Barack Obama, Inaugural Address, January 20, 2009