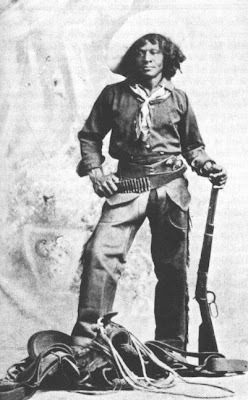 (Nat Love, born in 1854)
Every summer, the first week back at summer camp when all staff reported for duty, all of us worker bees had to help get the horses down from the winter pastures, and halfway re-break them so they remembered what it was like to wear a saddle and bridle, and didn’t thoroughly savage the campers and run amok on the trail rides.

It was only a week of riding and brushing and gentling, and after that week, those of us who taught water skiing or swimming or crafts or photography or worked in the kitchen or laundry or tutored the kids who were there for Math Camp — we all got back to our normal summer lives. But the dudes and dames who taught horsemanship and who lived all summer long in Conestoga-style wagons and used outhouses… they were in for the ten week long haul with the heat and the dust and the curry combs and hoof picks; the puckey shoveling, the hay baling and the feeding and the brushing and the whiny girls who thought they wanted a pony before they found out how much work they are, and the kickers and the biters and the very boring trail rides (and the trough dunkings), and each and every week, the rodeo.

It was a week’s worth of work that I remember well. It gives me, to this day, a deep appreciation for cowboys.

African American cowboys are also of interest to me, as every year, the first Saturday in October in Oakland there is a fantastic and fun parade celebrating them. It’s the only parade like it in California, at least, and it’s a big eye-opener every year for people who think the West was explored and settled only by people who looked like John Wayne, handsome as he was. Not only were there African American cowboys, there were vaqueros, too. 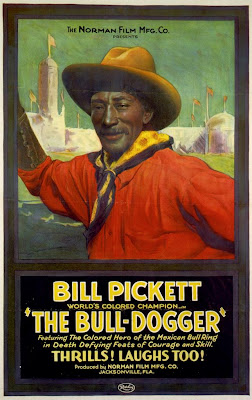 (1923, the Ritchie Lithography Corporation.)
There’s a lot of fun and crazy history in the Old West, and the “colored cowboys” celebrated in that history were well known for not only their skill but for their crazy hijinks in the saddle — for instance Bill Pickett, who was born in 1870 near Taylor, Texas, and who left school in the fifth grade to ride the range after longhorns, if you can imagine it. Knowing that many cowboys used bulldogs to help corral the steers, Bill figured anything a little dog could do, he could, too. The bulldogs jumped up and bit the steers in the sensitive area of the upper lip and nose… and eventually, Bill taught himself to do that, too! It was called “bulldogging.”

We can only imagine how many times he fell off, was bloodied and bruised and battered in order to learn this skill — but the notoriety it gave him at county fairs helped him launch his own Wild West show with his four brothers — The Pickett Brothers Bronco Busters and Rough Riders Association. In the 1890’s, a Wild West show made up entirely of African American men — was pretty wild stuff! They put on a great show, and Bill went on to star in several rodeo revues, and a couple of movies, too. The name Bill Pickett is even today still remembered in rodeo circles.

Helen Hemphill likes cowboys, too, and she has done a tremendous amount of research and exploration for her historical narrative, The Adventurous Deeds of Deadwood Jones. I got interested in reading her book after seeing her snazzy book trailer — it looked like the book had adventure and chaos and longhorns — which was good enough for me. In The Adventurous Deeds, I discovered a surprisingly gritty, realistic, historical narrative which reveals a realistic look at the lives of cowboys of all color in the Old West. (Here’s my review.)

Reminiscent of the “Deadwood Dick” dime novels which caught the imagination of junior cowpokes between 1877 and 1897, this novel has plenty of adventure, derring-do, heartache, and lots of time on the trail. This book is available today in bookstores all over. (Congratulations, Helen. It’s awesome!)